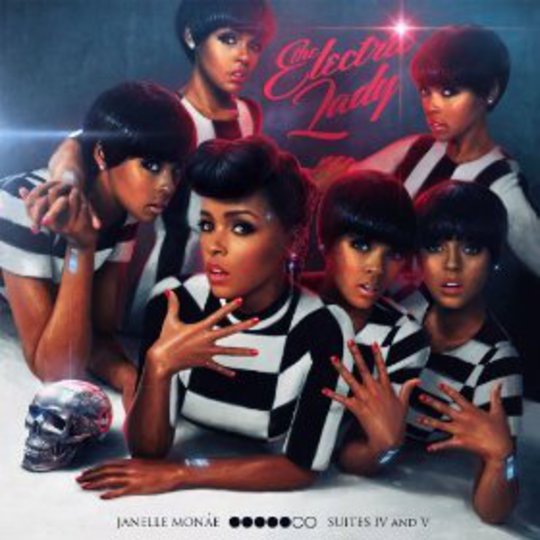 It’s hard to recall many artists who have emerged from a debut record with such an assured sense of artistry and potential stardom as Janelle Monáe. Commanding attention with the unshakable ‘Tightrope’, the three years of live shows since have put her at the receiving end of a tidal wave of well-earned clichés, proclaiming her the tuxedo-wearing, foot-sliding, gender-shaking saviour of R&B past, present and future.

It’s far from unmerited: how many people can you name who are able to roll out a straight-faced cover of Jackson 5’s ‘I Want You Back’ and legitimately nail it? And what greater sign of kinda-a-big-deal can there be than a second LP with an opening song guesting Prince? But for all the irrefutable evidence of Monae being within a fingertip of becoming a Beyonce-rivalling, stadium-packing superstar anytime she wants to, The Electric Lady doubles down on her eccentricities rather than lurching further towards the mainstream, creating a glorious, unwieldy opus of futuristic-retro-funk-soul-R&B-pop.

The Electric Lady is undoubtedly a demonstration of heightened confidence – but it’s a self-assuredness which permits her to sound a lot more laid back, rather than charged up. On the one hand, Electric Lady certainly plays host to Monáe’s most out and out sassy moments (when was the last time you heard such an earnestly delivered "cha-lang-a-lang-a-lang" actually stick the landing?) but, she’s not desperate to vie for your attention here. She knows she’s already got it, and so there’s no need for neon lit arrows pointing to the choruses and the hooks, nor is she in the business of giving you a map to find your way around these unapologetically sprawling 18 tracks.

Cuts like ‘Q.U.E.E.N’, for example, not only build and release their filthy mid-tempo funk grooves with more nuance than the airwaves are likely to forgive, but they also unfold with no regard to conventional structure. The Erykah Badu guest spot rises out of nowhere; spitting fury, caressed by luxurious horns, and bearing little resemblance to the track’s starting line. Across the whole album, these songs manage to sound at once completely spontaneous – suddenly throwing syncopation into the mix, or taking things up a level with a guest spot just as it the song’s hitting its climax – while also being under meticulous control. It’s a thrilling blend, which makes the album feel like it could take a sharp turn at any bar, without ever feeling anarchic, unedited or shapeless.

It’s not a totally flawless record by any stretch. The irritating interludes of a fictional radio show, fleshing out the android alter-ego of Cindi Mayweather, are symptom of a half-sketched conceptual vehicle for the running theme of otherness in Monáe’s music; a theme which is more strongly rendered when Monáe projects more of herself (as on the showstopping one-two punch of ‘Victory’ and ‘Can’t Live Without Your Love’), rather than distancing the listener with a sci-fi disguise. And when she tries to split the difference between the album’s poles of indestructability and fragility, we end up with inflated dramatics and kitsch lyricism, as with tracks like 'Primetime' – tracks which hold themselves up through the power of Monáe’s performance, but fall short of her tallest skyscrapers.

But in spite of its sweeping musical and thematic ambitions, The Electric Lady emerges as a surprisingly coherent listen. Beyond all the album’s polarities and shape-shifting, it finds Monáe sounding more human than we’ve ever heard her, and that’s the source of its richest successes. Her assuredness is not a fumbled gamble; her confidence is not misplaced. The Electric Lady cements Monáe as a genuinely formidable talent – a talent which will only continue to mature, as she continues to shed facades and gives us even more of herself.