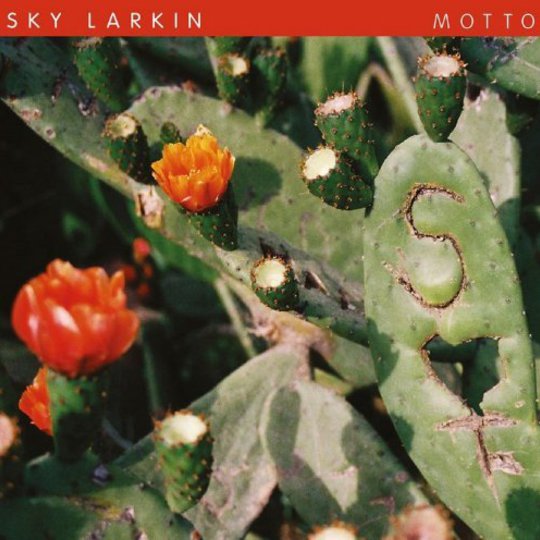 You’ve heard of grasping the nettle, but what about upping the ante and trying a cactus? There's one adorning the cover of Sky Larkin’s third, proudly defiant record, and it’s a fitting image for a band that has quietly and steadily built a reputation for spiny yet deceptively succulent rock. To this point that is, as Motto - a giant leap forward - should by rights see a band that was previously and puzzlingly sidelined in British indie circles garner the recognition they merit. The record is of such quality and vitality that they now simply demand it.

At first Motto seems like a lesson in managing an aesthetic with sublime ease - it’s brilliantly taut, direct and urgent throughout. It’s frequently thrilling as the band eagerly rip into proceedings, playing as an unmistakably re-energised unit. This follows the departure of bassist Doug Adams (OK, we’re all thinking it: maybe he’s gone hitchhiking around the galaxy), with Sam Pryor, his replacement, and the addition of Nile Marr as a second guitarist swelling the band to a four piece.

Better armed to explore their scope, the band gambol through the record, powered by the unalloyed pleasure found in the pleasantly fiery guitar interplay between singer/guitarist Katie Harkin and Marr (not a bad surname for a guitarist to have), pushed on commandingly by drummer Nestor Matthews; air drummers are well served throughout. The machine-tick of ‘Italics’ careens into a giddy second half, a spitting vocal tottering over itself before the initial groove returns, finally collapsing into a phased outro. ‘Loom’ is even better - and comfortably one of the guitar singles of the year - that’s over in a couple of minutes of heady, strident guitar and tumbling, muscular drums. Where many bands would be tempted to eke out such killer stuff, Sky Larkin just see no need to dwell as they’re dripping with a new-found confidence.

The record’s littered with similar highlights as the band hare on. ‘Newsworthy’, a song about retaining the spark in a relationship (maybe in the face of social media saturation “sucker-punch me with something newsworthy”), ‘Bravo Dodo’, and ‘The Loyal Beat’ are all shot through with an amphetamine fizz. Even ‘Frozen Summer’ seems brief at its six minutes of lazy shred, building and swarming to a killer riff counterpointed with a sanguine coo of backing vocals.

Such material, topped by Harkin’s effervescent yelp and yowl at times recalls The Joy Formidable and pretty much anything from Motto could sit comfortably on The Big Roar, which propelled TJF to Foo Fighters tour support. Yet whilst sharing general demeanour, there’s an earthier, gutsier execution here; rather than laying fuzz on fuzz, stacking overdubs as if bigger is better, Motto is largely uncluttered and unadorned, and sharper for it. The songs are simple and concise, but have myriad twists on simple guitar motifs, making matters seem fresh and explorative.

But back to the cactus. Closer inspection shows that all the spiky verve belies a struggle with important and pressing concerns, and the record actually unfurls slowly, even painfully. It isn’t shy in showing its bruises, and that bravery makes the songs stick. Despite its playfulness, ‘Loom’ is actually a disarming take on loss and grief, while 'Treasury' marks an attempt to keep the memory of lost love alive. The jagged title track strikes at those that would take the easy route to success, whether it be vapid sloganeering or pandering to the vagaries of fashion; Harkin, dead-eyed, intones “if I had a motto I would tell you now / from the catchphrase of a cash cow”. It’s a theme revisited on the scintillating ‘Carve It Out’, where learning the hard way is shown as being the only option: "can we carve it out / a life in the shape I care about... can you live with that?" over buzzsaw guitars. It's often as touching as it is exciting.

Sky Larkin clearly know nothing but work, dogged application and, yes, heartache. Motto is, deep down, so good because it shows there are no shortcuts. Success takes graft, experience and expansion of horizons. Now eight years into their career, the band’s time should come. This is a proud record that is best played loud, and often.

Invisible in Your City