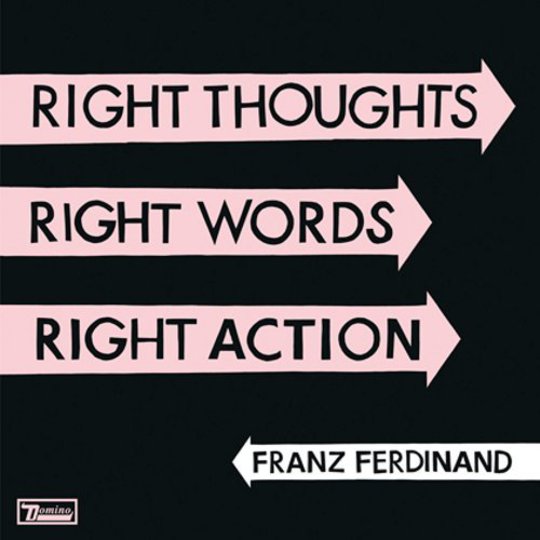 God bless Franz Ferdinand. Reliable, enduring, brilliant old Franz Ferdinand. Catchy, danceable, clever old Franz Ferdinand. Things have moved on a great deal since ‘Darts Of Pleasure’ and ‘Do You Want To’ soundtracked sticky-floored, sticky-hipped and stubble-on-the-sticky-lipped encounters in the dark of the matinee back in oh-four. Boys with guitars don’t sell anymore, Orange Juice and Gang of Four are no longer the musical touchstone for art-wave indie bands, and it’s all got so much limper. So much more safe. So much less fun. They have their spiritual successors, Django Django for starters, but they can only go so far. It was, frankly, about time we had another Franz Ferdinand record, and we welcome this one with open arms.

Right Thoughts, Right Words, Right Action is only album number four from the popstastic Glaswegion quartet, which is weird as it really does feel like they’ve been around forever. Its initial appeal is completely in its familiarity. As opposed to the Franz that presented us with Tonight: Franz Ferdinand four years back, all keyboards, and human-bones-for-percussion and high concepts, Right Thoughts… plugs directly into the hotwired pop heart of their 2004 debut. It has the same Frankenstein smushing of post punk and disco via artschool tweecore, scythed occasionally with krautrock keys, with Alex Kapranos’ bloodthirsty half-croon delivering witty and sensual missives about pop music, bright colours and strawberries.

We kick off with corking first single ‘Right Action’, probably the most Franz Ferdinandy bit on the most Franz Ferdinandy album of Franz Ferdinand’s career. It fizzes, it shimmies, it bops, there’s a little bit of Chic, a little bit of Orange Juice, a little bit of Costello and a lovely, whirley Sixties organ. As dancefloor-orientated indie goes it ticks a lot of boxes. So far so Ich heiße super fantastisch. The spine-twitching, plimsoll-twisting groove runs straight into ‘Evil Eye’, which has the good grace to kick off with a hybrid beat merging ‘Another One Bites The Dust’ to ‘Billie Jean’, and is every bit as awesome as that sounds. Kapranos opens the song by asking “What’s the colour of the next car?” and in what is possibly the most Scottish line ever committed to song his band answer, “It’s red ya’ bastard!”. If anything ‘Evil Eye’ is better than ‘Right Action’, and an obvious single choice. This is what Franz Ferdinand do so well- back in the halcyon days of Britpop there were two sorts of bands, those that boys sang along to and those that girls could dance too. The best managed both. It’s what Franz achieve here so admirably. By the third track, ‘Illumination’, which deviates from the early FF formula with brass stings, and then crystalises it with a vintage synth solo, you’re utterly won over.

What Franz Ferdinand have done here so successfully is distill and concentrate the formula that made them so appealing to begin with - the wit, the tunes, the riffs- everything feels perfectly tooled. It’s a satisfyingly snack-sized 35 minutes of pop bangers that doesn’t drop the ball once and never overstays its welcome. From the garagey ‘Bullet’ to the Beatleish ‘Fresh Strawberries’ to the spiky pop of ‘Treason! Animals.’ Kapranos and co have delivered what is simultaneously ‘just another Franz Ferdinand’ album and one of the indie records of the summer. Don’t leave it so long next time.