Where the Heaven are We 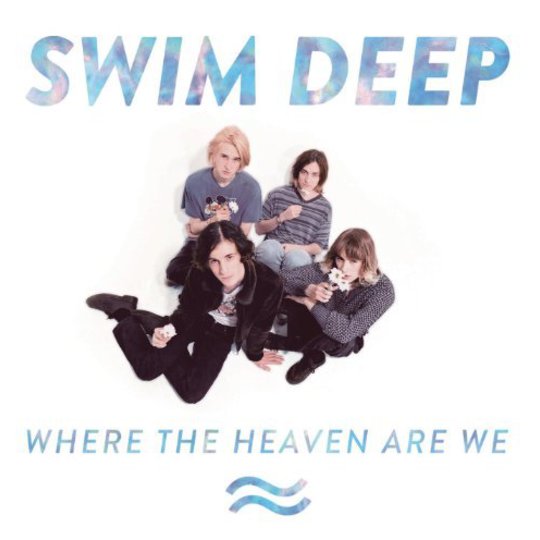 In 10 years' time, this Swim Deep will not be fielding interview questions about a Where The Heaven Are We anniversary tour. Their debut album doesn’t fit into that Great British niche where so many guitar bands reside; eternally reliving the songs of their youth to an aging crowd of thousands. They will be free to outgrow the B-Town scene they emerged from with Peace and go on to write the album they’re capable of. A classic, perhaps.

In the meantime, should you bother with WTHAW? Too bloody right you should. Squished into its 11-track-frame are a handful of songs that flatter the talents of anyone who’s young, bored and itching for adoration.

“I wanna be everything that I’m not,” declares frontman Austin Williams on ‘King City’. “I wanna be rich. I want to show off.”

Brave words for the opening line of your single, unless you’ve got one hell of a tune to back them up with. Swim Deep have four: ‘Honey’, ‘The Sea’, ‘She Changes The Weather’ and that aforementioned ode to the ever-alluring indie-rockstar fantasy. They all shimmy around a winsome template of chiming six-strings and lackadaisical lyrics hinting at what might have been for WTHAW and, explaining why it falls short a tad too often.

If you listen to just one of these songs, let it be ‘Honey’. From the moment its irresistible riff bounces into life, Williams and his merry bunch are set on selling you a fantasy. “Don’t blame the time on your wrist for not doing what makes you tick,” he purrs; willing you to skip town with him on a great escape out of suburbia.

This is the kind of teenage dream that can never die because it’s reborn every year by a brand new gang of renegades. Its three and a half minute form may be familiar. The feeling of infinite possibility it inspires certainly is. When you grow tired of that sensation, you’ve got bigger problems to deal with than the Swim Deep album being a disappointment.

‘Francisco’ is the closest WTHAW comes to recapturing ‘Honey’s golden tones. Like a lot of the album, it’s doe-eyed, mid-tempo and washed in dreamy synth. Had Pavement persuaded Stephen Malkmus to tone down his inner cynic and record Crooked Rain, Crooked Rain with one of Ed Sheeran’s production team, then they may have ended up with a similar sounding record.

As it meanders towards its conclusion, the LP melds into a uniform mesh of pleasantly forgettable ditties. ‘Red Lips I Know’, ‘Soul Trippin’ and ‘Stray’ could all do with an ounce of incisive snark and an overall infusion of memorable musicianship. To be bookended by the aching shoegaze swell of ‘She Changes The Weather’ does them no favours at all.

That said, The La’s will never make another album, The Stone Roses should have canned Second Coming and the Gallagher brothers have spent almost two decades threatening to trump Definitely Maybe.

They all stumbled at the first hurdle and, chances are, you care about them a whole lot more than their former contemporaries. Swim Deep could do much worse than to follow this road less travelled.