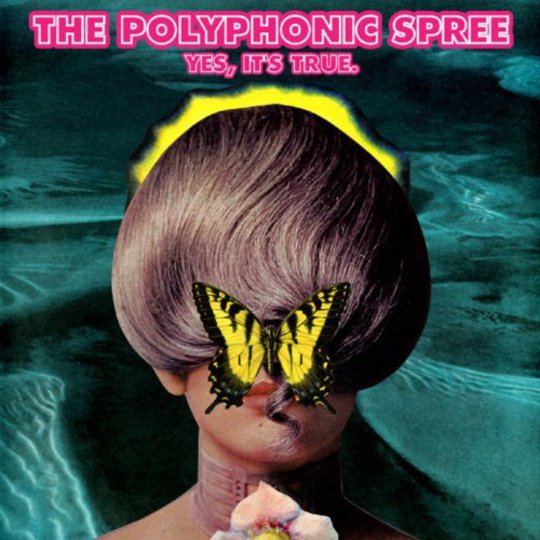 It's been over a decade since Tim Delaughter conceived the confetti cannon to the face that is The Polyphonic Spree. When they first appeared, the faux-cult robes, twee harmonies and feisty horns of his self-styled 'choral symphonic pop/rock band' were an exuberant antidote to dour indie posturing, but after three albums of colourful - and occasionally overbearing - music, they went into hibernation.

The intervening six years has seen them undertake somewhat erratic work, including an extensive tour, a Christmas album, a live recording of The Rocky Horror Picture Show and a brief hiatus, where Delaughter splintered off into subdued side-project Preteen Zenith. In between all of this, the 22-strong collective found time to pick up their robes and return to the studio with a renewed sense of purpose, for the Kickstarter-funded effort that is Yes, It's True.

As Amanda Palmer proved last year, crowd funding artistic endeavours brings with it a myriad of pitfalls. While in many respects it's a fantastic opportunity to aid established musicians who would struggle to fund a record, when artists do come cap in hand to fans, there is an implicit consideration that they won't let their backers down. So with that in mind, it shouldn't come as much of a surprise that this is the most Polyphonic Spree-esque album, The Polyphonic Spree have ever made.

If you've heard a single note of their previous work, then you already know what Yes, It's True is going to sound like. Worship music for secular self-helpers, that's layered into an overblown anthemic explosion of pop psychedelia; one where we all join hands, gaze up to the sky and stare unblinking into the light. Uplifting stadium pop, overflowing with catchy hooks, sing-a-long choruses, declamatory horns, grandiose harmonies and astral flutes. While Delaughter's lyrics mix sincerity and the pseudo new-age, sometimes to shattering effect, other times faltering on their own verbosity.

When this works best, their tracks walk a razor's edge between the grossly overblown and the soberly endearing. Whether it's in the heartfelt lyrics of album closer 'Battlefield' when Delaughter sings, "It feels like pain on the battlefield, as you walk on by" and the sweet pop shimmer of 'You're Golden', with its soft harpsichord and restrained horns. Or, on the far grander 'Carefully Try' and 'Blurry The Lines', both of which fizz with a bittersweet effervescence which saves them from vapidity, even as they veer between florid pomp and theatrical swagger. Unfortunately, these examples of the band's ability to marry reflective personal experience to their trademark blend of smoke and glitter, are the exception not the rule on Yes, It's True.

Towards the last half of the album, the song 'Raise Your Head', slowly builds around the uninspiring repetition of a childlike rhyme; "Raise your head to the sky/You'll be free when you try", and it's this line which leaves you wondering; why is a band that sings so evocatively about trying harder, finding it so difficult to heed their own message, whether it's in the banal pseudo-theatricality of 'Heart Talk' - which sees Delaughter doing his best village hall impersonation of Tim Curry - the lazy horn plod of half sketched filler that is 'Let Them Be', or the vacant whimsy of 'Popular By Design', with its tired hooks and clumsy backmasking. Throughout the album, they seem to be desperately striving to add flurries of interest to songs that at are, at best flat and at worst forgettable.

That's not to say it's wholly irredeemable, it should certainly please some of the fans who have funded the return of The Polyphonic Spree, and will undoubtedly play well in their euphoric live shows. However, on record Yes, It's True feels insubstantial, which is disappointing because when they don't go overboard they can still craft interesting music. They just don't seem to realise that no amount of rampant sonic enthusiasm will replace genuine emotional depth, an attitude which like the novelty of their robes, has begun to wear very thin.