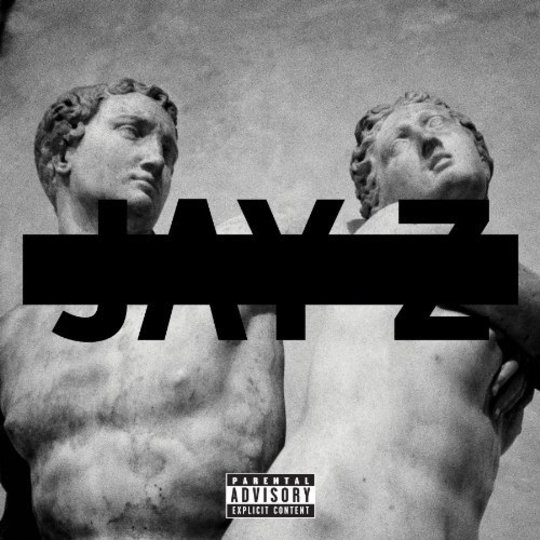 As I type, the story of this album has already passed into folklore. As much a production of corporate whoredom, as of Timbaland and his catalogue of beats, Magna Carta… Holy Grail marks a turning point. Not only for hip hop's hitherto unchallenged monarch, but for the genre itself.

Saying that the deal with Samsung was yet another cynical nail in the crumbling coffin of hip-hop would be too obvious. Jay-Z's affiliation with corporate America have long outstripped the weight of his youthful crimes on the street corners of Brooklyn. It's not even revelatory for a major artist to give their latest release away - it wasn't so long ago (in a deal which made even his most ardent apologists cringe) that Prince and The Mail On Sunday became dubious bedfellows.

Instead, it's the wider implications that this album can exist in a world where other major label hip hop struggles to make big numbers, while up-and-comers claw tooth and nail through a purgatory of mixtapes. That the most iconic living figure of the game can give his work away to a select few, get paid large, and expect to retain his position at the top of the tree.

If as he claims on 'Crown' he has ascended beyond his traditional role in rap, "You in the presence of a king/ Scratch that, you in the presence of a god", then the release of Magna Carta… Holy Grail feels like he's spitting in the face of his disciples and asking them to applaud his boardroom strategising. Maybe then, when approaching this album, it would pay to remember that sometimes even "a god" lets bad things happen.

State-of-the-rap-nation moralising aside, once the hype's swept away and our faces wiped clean, what can we really expect from the hip-hop Alfather's thirteenth release?

We live in a post-Yeezus world and in light of that record's ragged and snarling skullfuckery, Magna Carta… Holy Grail's production might come across as rather slick and palatable. That said, it would be a mistake to equate its relative sonic safety for unvaried vitality - indeed this record might contain the best beats of Jay's late career.

This is in no small part due to the skilful work of lead producer Timbaland. His beats are the glue that hold this album together, binding even the tritest of Jay's flows into something close to captivating. Whether it's the loose cosmic swirls of 'Picasso Baby', the rippling, dissonant electronica of 'Tom Ford', or the lively snap, clap and rattle of 'Versus', he doesn't fail to bring inspiration and bounce to proceedings. He even samples the infamous "no wire hangers EVER!" line from Mummy Dearest for the close-to-Kanye-but-not-quite-as-bugfuck-insane fatherhood angst of 'Jay-Z Blue'. A few fellow producers get close, most notably Hit-Boy with the delicate piano, boom-bap beat and pulsating horns of 'Somewhere in America', but the work of Tim Mosely proves hard to follow.

Sadly, the bond between Jay and his list of heavyweight associates pretty much ends with his producers. Justin Timberlake reciprocates the phone-it-in favour of Jay's weak verse on 'Suit & Tie' for opener 'Holy Grail', Rick Ross pours gruff ennui on product placement ego-wank 'FuckwithmeyouknowIgotit', while the all-star team of Nas, Pharell, Timberlake and Beyonce fail to liven things up on 'BBC'. The latter of these tracks is possibly the most deplorable, feeling like a party in a vacuum, the beats seemingly recycled from another Pharell production, 2013's pop nadir 'Blurred Lines'.

A few saving graces come in the form of Beyonce and the ever reliable Frank Ocean. Mrs Carter lending her breathy vocals to 'Part II (On The Run)' and its r&b retro futurism. Undercutting easy criticism by admitting it's a hackneyed love song from the outset, this thematic sequel to '03 Bonnie & Clyde' takes their tale of romance as criminality to tender new heights. 'Oceans' sees Jay as elder rap statesman, considering the servitude forced upon his antecedents, with thoughts of slave ships between champagne sips, as he looks across the water from his yacht. Subtler metaphors interweave the sweeping vocals of Frank Ocean and this time thankfully, some deft production from Pharell .

Moments of collaborative semi-poignancy aside, Jay is most at home without guest vocalists around, as they only hinder his increasingly aggrandising lyrical content. Whether he's shunning Molly and rocking Tom Ford, letting his daughter touch his prize Basquiat, "Go ahead lean on that shit Blue/You own it" on 'Picasso Baby', or justifying his lack of philanthropy "And just for clarity, my presence is charity/My flow is a gift, philanthropist" on 'Nickels and Dimes', this is overblown cognoscenti rap in its purest form. In part trying to live up to the ludicrous allusions of the album's title, in part born out of almost two decades spent breathing rarefied air.

Elevating his concerns to a higher plain, Jay is clearly setting his desires beyond those of the average rapperatti, but in doing so, tests this luxury rap aesthetic to its wearisome limits, creating a world where art, style and traditional hip-hop culture have never felt more hollow, meaningless and disconnected from the bounds of reality. An unselfconscious place, where he can happily name-check Michael Jackson, but is oblivious that a boast of; "Bulletproof glass, glass roof like the Pope", shows he's as far removed from the spectrum of relatable human reality as that musical 'king' ever was.

Magna Carta… Holy Grail isn't a total bust, but neither is it anywhere close to Jay-Z's finest moments. Instead it's a strange and anodyne record, that speaks of a king, nay a god, who may not have lost his crown, but would benefit from leaving his lofty boardroom once in a while. Maybe if he did, he'd pay more attention to acts like Joey Bada$$ or Run The Jewels: both also released free albums this month and both leave Hov artistically in the dust. It may be true that their payday will be smaller than one of his well brokered deals, but for them hip hop is no longer Jay's fiefdom, it's a republic and their #newrules mean they don't need a king anymore.