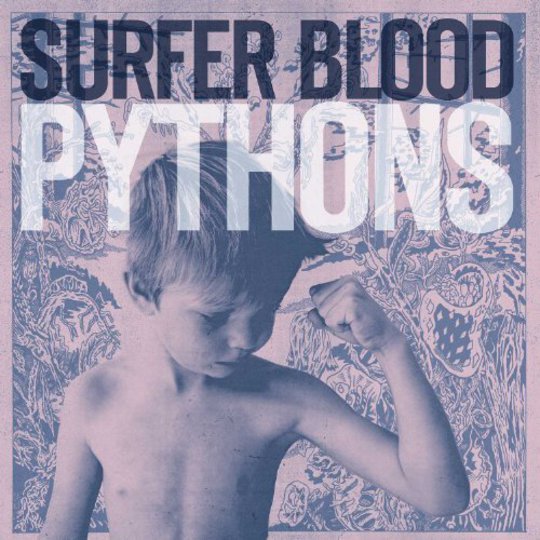 You pretty much know where you're going with Florida's Surfer Blood: melodic surf rock viewed through a sepia-tinged Instagram filter. It's music for summer road-trips that feature station wagons with the windows down and surfboards bungeed to the roof. That was the successful recipe on their 2010 debut Astro Coast, and new album Pythons doesn't stray far from the feel good movie formula. At least, not to begin with.

Indeed, the vacation starts out in fine, upbeat form with the opening triptych of 'Demon Dance', 'Gravity' and 'Weird Shapes' showcasing the band's instinct for a catchy hook. It's light, frothy stuff that washes over you like a summer tide, a glorious ocean of fuzzy melody and lilting vocals.

Of course, the initial euphoria of a road trip doesn't last forever. The trash builds up in the footwells. Someone ends up doing the bulk of the driving. Tension starts to rise, subtly. And so it is with Pythons.The first hint of discord arrives with track five, 'Squeezing Blood', which introduces a slightly darker tone, albeit just for a moment. But the mood soon passes, with 'Say Yes To Me' and 'Blair Witch' both reasserting singalong carefree fun. The sun's still out.

The storm clouds really begin to gather as we approach the final third of the album. There's an abrupt shift to the pensive with 'Needles and Pins'. A wandering piano line adds a mournful quality, only heightened by singer John Paul Pitts' sing-song delivery. 'Slow Six' goes to a darker, more nihilistic place, building to a surprisingly apocalyptic riff in the last quarter of the track. If this were a road trip, the group would have exploded, the couple would have argued and one would have run into the arms of the stranger picked up on the road.

Closer 'Prom Song' brings the mood full circle, tonally moving from a somewhat deflated place - epitomised by the vocal refrain "I just can't be bothered" into a more upbeat conclusion. Still, it's obvious that the euphoria has passed, and now it's time to go back to work, or school, or whatever drudgery awaits you. Summer's over.

This isn't to say that Pythons is a depressing album - far from it. On the surface, it's a breezily melodic collection of summer songs. But it's got an edge, moreso than Astro Coast, and that element of creeping unease makes Pythons a fuller, more mature and honest album than its precursor. It may well be holiday music, but this time it's a vacation tinged with regret.

Empire of the Sun

Ice on the Dune