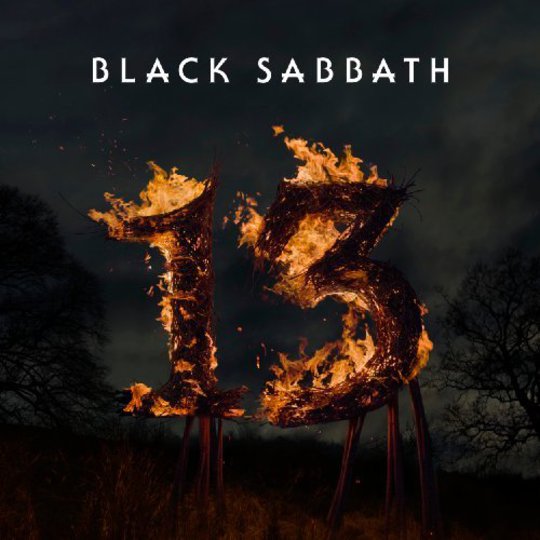 13 is not the thirteenth Black Sabbath album. It is the nineteenth. It does not have 13 tracks; it has eight (11 if you plump for the deluxe model). Regrettably, 13 is not a track-for-track cover album of Blur’s artsy 1999 break-up record. The number 13 does look cool when made out of wicker and set on fire for an album cover though.

If you’re superstitious, you’ll believe the number 13 to be unlucky, and might therefore stay safely indoors reading Rhonda Byrne on the thirteenth day of every month or avoid owning more than 12 pet cats. Black Sabbath have certainly suffered their fair share of bad luck over the years. Promised wine, women, riches, and rock‘n’roll immortality, if they’d bothered to check the small print of that contract placed in their hands by the charming entrepreneur with the red-pronged tail at a foggy crossroads in Aston, they’d have realised they were cursed.

After recording several world-changing albums in the Seventies, things began to unravel. Legal and management problems coincided with drink and drug addiction, leading to the sacking of a burnt-out Ozzy Osborne in 1979. He jetted off to become a bouffant cartoon to the delight of US audiences while Captain Tony Iommi, driven increasingly mad by the white whale that had stolen his fingertips, sailed the Sabbath brand and its rotating crew of motley rapscallions into ever more turbulent waters.

The original line-up reformed in 1997 but, two songs on a live album aside, any hopes of new material were put on hold by the monstrous success of Osbourne’s reality TV family who have also been blighted by drug problems and illnesses including a communal form of Tourette’s. Now, finally, the first studio album by the band’s original line-up since 1978’s Never Say Die has been completed. Well, not quite, because The Curse Of Sabbath has struck again. Drummer Bill Ward is absent due to contract disputes.

Brad Wilk of Audioslave fame is a decent understudy. He beats the skins hard and unfussily so as to complement the other musicians rather than steal their attention, while sneaking in the occasional look-at-me flourish. This is similar to Ward’s style, yet his absence remains niggling. It’s as if The Beatles had reformed without the magnificent Ringo Starr: not awful, but not quite right.

Rick Rubin supplies a massive, slick production sound to this big, bold and, yes, slightly daft rock record. The meaty riffs, the softer passages, and whole mood are all theatrically spooky. Geezer Butler’s warm bass proves both juddering and fluid. Iommi sets off regular firework guitar solos which shrewdly disperse before outstaying their welcome. Ozzy’s voice isn’t as frail as he looks. He sounds a little weary at times, such as the half-hearted “all right”s he musters towards the close of ‘The End of the Beginning’, but then it is eight minutes long. We’re all a bit tired by that point.

In fact, five of 13’s eight tracks exceed the seven-minute mark. They don’t show much reciprocated influence of the abundant epic drone or stoner acts they’ve inspired over the years. They’re just long, slow, crunchy, indulgent Sabbath songs (nothing wrong or unexpected about that). Among the shorter cuts, the verses of ‘Live Forever’ (not an Oasis tribute) have a quicker ‘Paranoid’ vibe. ‘Zeitgeist’ is basically a ‘Planet Caravan’ rewrite, complete with bongo percussion and ambient effects.

Sabbath have always been obsessed with death, and as the reaper edges ever closer the existential simplicity of lines such as “I don’t wanna live forever / But I don’t wanna die” are poignantly endearing. The dreadful gothic rhyming triplet of “Out of the gloom, I rise up from my tomb, into impending doom” induces cringes not chills, but Sabbath have always been tongue-in-cheek and such lyrical clumsiness is unlikely to dissuade anybody from headbanging along to the seductive musical groove of ‘God Is Dead’.

Pint-swigging oldies in faded black jeans who reckon that music peaked circa 1975 will dig 13. Sports-shy pubescents forging a vaguely alternative identity from their mainstream peers by buying Kerrang! once a week will dig it. Most folk in between will nod along acceptingly. To hate it would be as much a waste of energy as getting your knickers in a twist over that new Beady Eye record.

13 does what you’d expect it to, no more, no less. It doesn’t break new ground, it doesn’t have the impact of Sabbath’s early work (how could it?), but nor does it tarnish the band’s legacy. You’d be mad to expect a bunch of millionaire pensioners to match the fire of those penniless young men who forged their way out of manual Midlands industrial work by reinventing heavy rock and changing the musical landscape forever.