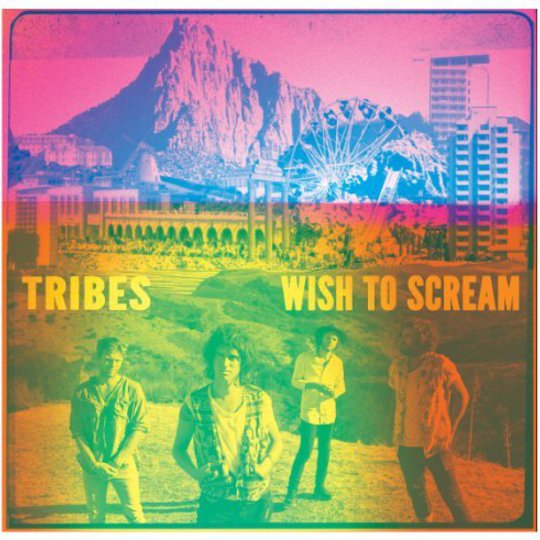 Every so often, the UK music press seizes upon a new guitar band to spin doctor, and more often than not, proclaims them the next Arctic Monkeys, next Oasis, the next big thing. A few years back, I saw the Camden-based, leather-jacketed, guerrilla gig-playing Tribes written up as the next Libertines and, for much the same reasons that I can still be found buying the NME when Pete and Carl are on the cover, checked them out. Beneath all the hype, there seemed to be a lot of potential. Early demoes showcasing ‘We Were Children’, ‘Wherever’, and the Pixies-indebted, giant-riffed ‘Sappho’, all looked promising – yet their 2012 debut Baby was an undeniable disappointment.

This time around, they’ve swapped Liverpool for Los Angeles and, in keeping with the long tradition of British bands inspired by the Californian idyll, have exchanged grunge for Americana and the traditional blues-rock of the Rolling Stones. Wish To Scream is hardly an austerity album, with gospel choirs, horn sections, and a new keyboardist joining up, in addition to slick production values to go with the cinematic anthems that Tribes are shooting for.

However, though the sound has changed, unfortunately the overall impression has not. Once more, there were some hopeful singles released, and once more, the rest of the album doesn’t live up to them.

First single, ‘How The Other Half Live’, isn’t so far away from the better bits of Baby. By the time Lloyd sings the opening line “We need a change of direction”, it’s clear that they had already taken it. An epic anthem, it references both Primal Scream and Oasis before diving into a squealing solo and Stones-esque blues and stuttering vocals. The next teaser, ‘Wrapped In A Carpet’, was another total change of pace. Whimsical psychedelia, its baggy lilt and hooky chorus make it a surefire standout on the album.

Unfortunately, ‘Wrapped In A Carpet’ is one of few songs on Wish To Scream where Tribes are able to resist an overblown chorus. Rather than the stadium rock that they so clearly want to play, they often end up mired in middle-of-the-road soft rock – sanitized and unmemorable. Far too many songs are the same radio-friendly, mid-tempo kind of rock that appeals to listeners who don’t really like rock music. Aside from ‘Never Heard of Graceland’, a warm, laidback slice of Americana, they repeatedly fall for the same mistakes. ‘Englishman on Sunset Boulevard’ and ‘Dancehall’ are early Elton John-styled piano ballads, but with such predictable chord progressions, there’s nothing to bring them to life. ‘One Eye Shut’ and ‘Sons and Daughters’ are further Stones homages, but stay far too commercial and safe. Wish To Scream just don’t have the tunes to support the swagger - turns out being Keith Richards isn’t as easy as it looks.

Tribes have the opportunity to fill a real hole in the current UK scene; we’re missing a young rough and ready rock'n'roll band. They put on good shows, look sexy, and have the right kind of ideas behind them. But they really need to cut down on the filler and try to steer clear of the temptation of 'anthemic' faux-depth; if they concentrated on what they’re good at – catchy, no-frills rock – they’d fare much better.

Jackleg Devotional to the Heart