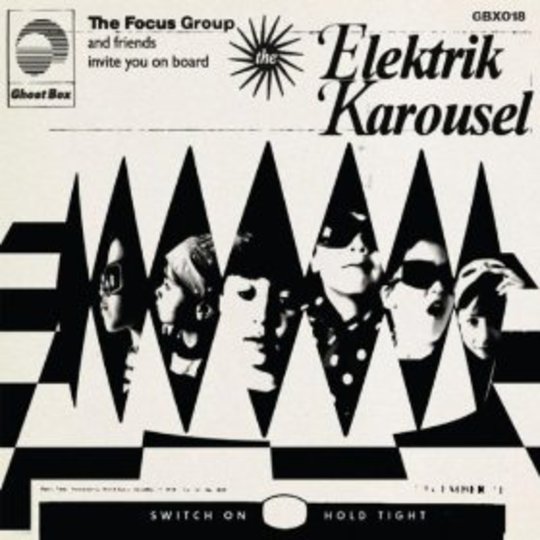 Julian House, the man behind those beautifully retro Ghost Box sleeves, is back as The Focus Group with more broken melodies, distorted children’s TV programme themes, Cold War psychedelia and all-round English weirdness. Possibly the most fascinating artist on the hauntology label, House’s vignettes on The Elektrik Karousel don’t break the formula of his four previous LPs - bursts of jazz, creepy old Theremin - but he’s so good at it now fans know what to expect. Want to convince a friend you’ve just spiked them with four tabs of LSD? Lower the lights and discretely press play. They’ll be clucking by track three.

Despite its surface weirdness, The Elektrik Karousel is a lot of fun, built around psychedelic jingles and Man From U.N.C.L.E. interrogation music. ‘The Plastic Castle’ and its guitar-edged harpsichord sounds like Brian May sent back to medieval times, while ‘Chordfl’ combines brass telephones and cheery piano into a teatime detective theme. Vinyl skips and matinee movie strings play over everything, House’s air of a cosy past never faltering - and never quite playing ball either. Ideas keep restarting, giving us glimpses of a universe of bellbottom trousers, free love and authentic wooden toys. Carousel indeed.

But between the steam fair music and jazzy tailpieces, The Elektrik Karousel has a malicious side, and sits comfortably in the more challenging section of Ghost Box roster. House’s queasy production is not unlike Xela’s 2006 zombie ocean album The Dead Sea, mixing medieval static with nightmarish shanties. The jangling on ‘The Heavy Blessing’ sounds like someone deliberately opening and closing a cash till, while ‘Harmonium’ blends hissing snakes and gospel choirs into a ghastly new whole. These pieces are as erratic and interchangeable as the rest of the LP, shattering the idea that restlessnesss is next to cheeriness and making for some wonderfully dark surprises: the squealing organs on ‘Petroleum Paisley’, a triangle being tapped over a stalling choir on ‘The Magic Pendulum.’

House balances both of The Elektric Karousel’s personalities, and keeps his circus of ideas revolving so quickly that the record becomes a spellbinding whole. Its colourful moments match the highs of the Third Eye Foundation - eerie, string-pecked symphonic warbling - and the less memorable numbers have the failsafe of never lasting too long, leaving you wondering what The Focus Group will throw at you next. The odds are it’ll either be some reverberating glockenspiel or a whimsical harpsichord ditty, but it makes for a trippy LP; possibly Ghost Box’s most abstract record yet.

Behind the Green Door