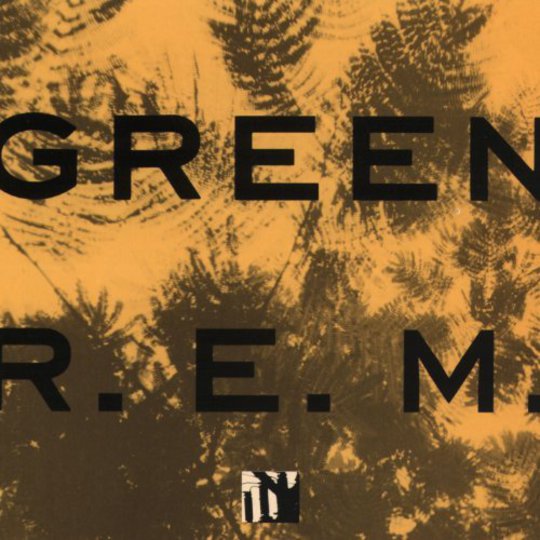 Despite nominally being the moment R.E.M. really hit the big time, 1988’s Green occupies a strangely transitional spot in the band’s career. It was the first album of theirs to not sound steeped in swamps and forests and folk legends of the Deep South. It was the first R.E.M. album to make use of the mandolin. It was the band's major label debut, which saw them finally overcome the global distribution problems of the IRS years enough to finally get a toehold on the UK, with a mime-tastic appearance on Top of the Pops for ‘Orange Crush’ and a tour that included a performance at the Birmingham NEC and two at the Hammersmith Odeon. And in the US it was a multiplatinum top 10 hit with an accompanying top 10 hit single (‘Stand’).

And yet… Green wasn't the album that turned them into global megastars (that would be the next one, Out of Time), but feels more like the culmination of R.E.M. as a college rock band. It was their last hurrah as a cult concern: a barely discernible number ‘4’ on the cover led fans – presumably very stoned fans - to speculate that after the ‘5’ on Document, the band were actually counting down to their last record. And if the music is different to that of its predecessors, Green is the end of an era in other ways: R.E.M.'s last record of the Eighties; their sixth album in six years before taking a three year break; the last record they would tour until 1994's Monster.

Green is the end of something and the beginning of something else and the continuation of something greater, but rather than get lost in grand narratives, maybe let’s focus on what it sounds like.

For the most part, Green sounds like innocence, a sense of youth and light and simplicity and clumsiness and play that had not been in the band's makeup when they burst out of the Georgian murk with the Chronic Town and Murmur.

There is a darker underbelly to Green, but the dominant tone in the first half is gently barmy, Sixties-inflected pop: opener ‘Pop Song ‘89’ is a goofy homage to The Doors’ ‘Hello, I Love You’; ‘Stand’ is a gloriously throwaway piece of Monkees-indebted bubblegum silliness; ‘Get Up’ is a sweet, dreamy exhortation to seize the day by the horns. With the plaintive mandolin ballads ‘You are the Everything’, ‘The Wrong Child’ and the gorgeous closer ‘Untitled’, Green finds its centre in a sloughing off of the years, a directness and openness underpinned by Scott Litt’s clear, unfussy production.

That description probably makes it sound exactly like a sell-out major label debut, but that's not the case – the innocence comes not so much from clever contrivance as the fact the band decided to trade instruments and pick up ones they didn’t really know how to play. So guitarist Peter Buck started dabbling with the mandolin, and contributed drums to ‘Untitled’, the beat apparently being too counter-intuitively simple for drummer Bill Berry to master. And poppy as the pop songs are, there is a certain, I dunno, R.E.M.-ness that infuses them – Stipe’s groaned “should we talk about the government?” on ‘Pop Song ‘89’ has a soulful weariness to it, and ironic as ‘Stand’ and ‘Get Up’ may be, there’s a palpable glee there, a clumsy, endearing joy.

That Green isn’t over saccharine or lightweight is due to its apocalyptic undertone, as represented by four songs. ‘Orange Crush’, the band’s UK hit, is a ferocious and surreal storm of martial chimes and ratatat drums inspired by the Vietnam War; ‘I Remember California’ alternates wired folk and colossal scythes of guitar and drums in an eerie presentiment of a drowned America; ‘World Leader Pretend’ is the ominous, more introverted dry run for ‘Losing My Religion’, a troubled meditation on emotional paralysis that also seemed to tap into the Cold War for its imagery. And then there’s ‘Turn You Inside Out’, the grinding psychedelic outpouring of aggression that would mutate into a monster (and a few years later, a Monster) on tour.

Green is R.E.M.’s Songs of Innocence and of Experience , and while it should be all over the shop, it coheres staggeringly well – put that down to good sequencing, great songwriting, an underlying naivety to even the bleak songs and allowing the sweeter music to take the lead. And less analytically, the band simply appeared incapable of doing any wrong at this time.

Perhaps slightly unexpectedly, Warners have picked up the baton of the twenty-fifth-anniversary remastered rereleases campaign from the IRS albums. If Scott Litt's lucid production hardly needs tinkering with, it was still sort of worth it. The bass and drums do have a shade more heft, especially on the ‘rock’ tracks – the bottom end of ‘Orange Crush’ sounds particularly good without feeling compressed or whatever. Maybe things are a tiny bit brighter and crisper across the board. But any improvements are minor.

The second CD is a live concert - Live In Greensboro , whimsically enough – and is decent document of the time, but rather underwhelming in comparison to the band’s staggering Tourfilm video from the same era. There’s a DVD on the fanciest reissue of Green that includes two songs from Tourfilm, which strikes me as taking the piss somewhat – a Green/Tourfilm double package would be a straight up 10/10 that every home should own, but if you want to watch a couple of tracks off Tourfilm you can just go to YouTube. Green is scarcely less essential on its own, but if you already have it this reissue is nice but not essential.