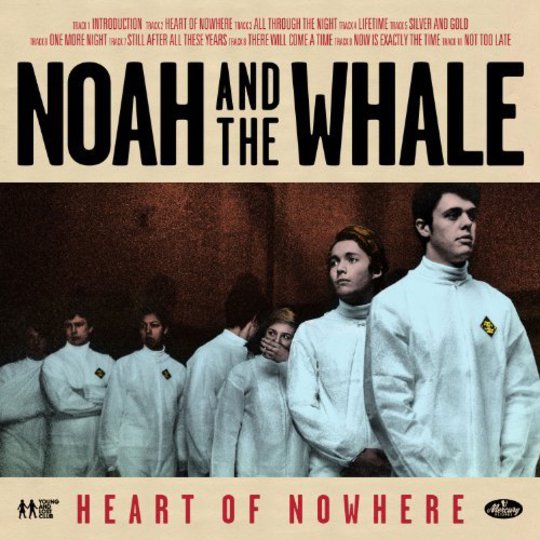 Noah & The Whale are a band that have mysteriously been overlooked, or well, just plain forgotten from the Mumford / Marling era of nu-folk, despite once being its early forerunners; poster-children for anything whimsical and twee. Maybe it was in the wake of their tweeness that the dust of Mumford or beauty of Marling was allowed to stride ahead, while Charlie Fink and co were content to laze around in the cutesy bottom drawers of indie. They have though continued to pen some rather marvellous tunes over the past few years. Nothing that chart-bothering besides '5 Years Time' and ‘L.I.F.E.G.O.E.S.O.N.’, but plenty of fantastically fun and yet forlorn fairy tale adventures like ‘Give It All Back’ and ‘Just Me Before We Met’.

This brings us to the new record, Heart of Nowhere, which is again a perfectly reasonable pop album with some of those storytelling ideas taken a little further, formed more interestingly, vocally moving towards that Paul Simon arena they’ve always fancied themselves orbiting. ‘All Through The Night’ is the first standout track, with a flapping arm pointing towards The Killers' more absurdly Vegas moments. But there’s a restraint to it though, a kind of curb that ruined their whole second album, now working in their favour to allow Fink’s vocal to sail into hazy irrationality.

The strings on ‘Lifetime’ are a reminder of this band’s proper folk background, while the chorus - a barricade of champion pop – show Noah & The Whale as being now very removed from Johnny Flynn whom they once could have shared a breath with. ‘Silver And Gold’ has a vintage feel; like one of those old rock ‘n’ roll records you hear a good DJ playing at a pub on a Sunday that you’ve never heard before, yet somehow sounds perfectly familiar and cinematic. It's like discovering a decent Fleetwood Mac track which has escaped your attention, and you have to imagine that’s exactly what Noah & The Whale are going for with this album, that their target audience is twenty-something fans of Rumours... and for the most part that’s what they pull off, especially in the guitar scratch of ‘Still After All These Years’.

Worth noting, and fans will agree, they need to address the monotony of their vocals as even by the end of ‘Still After…’ you can feel boredom coming on. It’s pulled nicely back by ‘There Will Come A Time’, the first single and likely showpiece of Heart of Nowhere, but Fink still seems to be finding the confidence in his voice that when it’s pushed is truly wonderful, but most of time a little dreary and unconscious. That aside, this is a lovely little record for folk fans who like a Seventies scuff.