Specter At The Feast 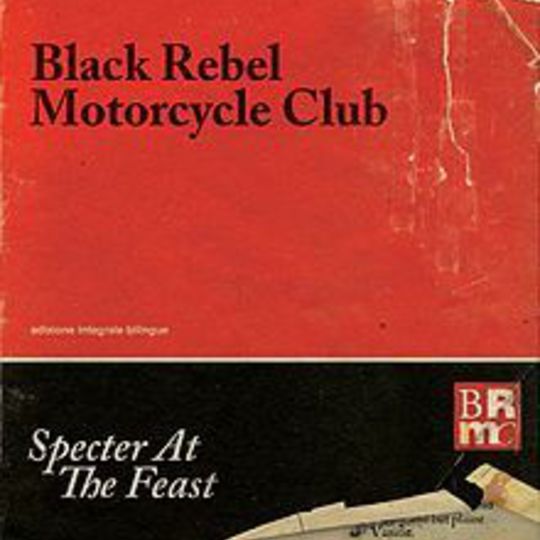 The days when Black Rebel Motorcycle Club would vie for front page headline space with The Strokes and Oasis are long gone. Which is arguably for the better, as despite being lumped in with the aforementioned and many more bands of the day, BRMC always stuck out like sore thumbs at an international manicure convention. Moodier, and with a tendency towards creating more aggressive rather than commercially enticing music, it was little surprise when third long player, 2005's acoustic Howl, saw them take a step in the opposite direction to their peers, many of whom had already burned out by this point.

While that record's stripped back approach encompassing traditional blues and country influences may only have indicated a mere diversion, it instilled a sense of belief within the band's core that anything was possible. And more importantly, highlighted a level of versatility indiscriminately glossed over until then.

So, 12 years on from the release of their debut, the trio - founder members Peter Hayes and Robert Levon Been along with one-time Raveonettes drummer Leah Shapiro - could perhaps be accused of sneaking their seventh long player out the back door while no one was watching. No fanfares, no fastidious advertising campaigns save for the odd clip on YouTube, and very little press in the lead up either. Instead, they've proceeded to go about their business in a respectful manner, constructing an album that serves as a fitting tribute to Been's late father Michael, who passed away in August 2010 during the band's set at that year's Pukkelpop festival.

Having produced Specter At The Feast's predecessor Beat The Devil's Tattoo, as well as playing an integral part in Black Rebel Motorcycle Club's development as a live outfit, Been Snr's influence can never be underestimated. Also a former member of Eighties new wave outfit The Call, one of whose songs ('Let The Day Begin') BRMC have covered here, their politically charged anthems rivalling contemporaries U2 and Simple Minds back in the day.

Musically, at least, 'Let The Day Begin' represents the most derivative four minutes on Specter..., if only for the fact its driving blustery tradrock could have casually slotted onto either of the band's first two records without so much as a whisper. Not that it's meant in a detrimental way. On the contrary, when it comes to foot-to-the-floor ballsy rock and roll no one does it better than BRMC, but for a band who've seemingly had one eye on the future with every release since the aforementioned Howl, it's a backwards glance towards their (admittedly elegant) past.

Where Specter At The Feast really comes into its own is when Black Rebel Motorcycle Club push themselves to the very limit. Opener 'Fire Walker' builds into a brooding, mid-tempo cinematic groover, lyrics like "And maybe I'm too blind to see the fire is all that walks with me" casting a forlorn and somewhat menacing shadow. 'Sometimes The Light' also ventures into previously unchartered territories, entering a similar psychedelic gospel arena to the one Spiritualized have called their own these past two decades.

Sometimes there is a tendency to just let rip as on the furious 'Rival' and obtuse punk rock of 'Teenage Disease'. "I'd rather die than be living like you" concludes Levon Been on the latter rather than the former's clarion call "I'm tired of killing for survival". Meanwhile, 'Returning' takes a more reflective angle, its sentiment apparent ("A part of you is gone") given the nature of Specter...'s existence.

Perhaps the biggest criticism here is that Specter... outstays its welcome, albeit minimally. Clocking in at just under an hour, its occasionally harrowing contents rendering it an uneasy listen, maybe if BRMC had taken a leaner approach Specter... may have ended up on a few more commercial radars. But then again, Black Rebel Motorcycle Club have never succumbed to such mercenary traits, hence the reason they still find themselves held so dearly by so many.

Long may it continue.