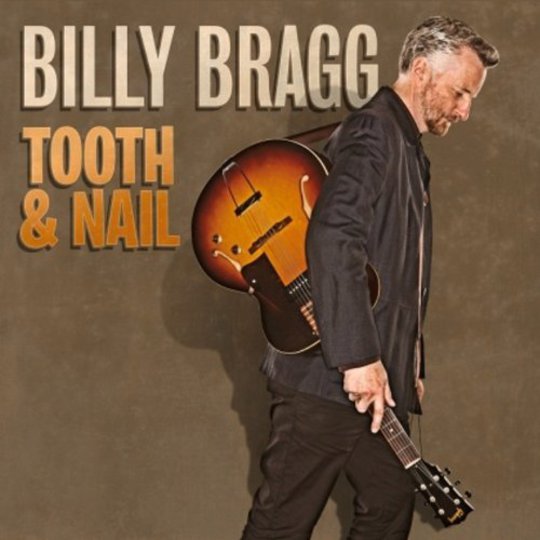 Thirty years on from his debut, Billy Bragg has never been in better voice. His anger might have mellowed and matured, but it is nonetheless all present and correct as he has settled into the role of leftist national treasure nicely (a role he shares with Tony Benn). And there is still plenty for him to doggedly oppose and rail against.

Despite this, Tooth & Nail is a relatively subdued affair that sees Bragg in a contemplative state. A record of soft, lilting Americana, there are no rousing ‘Internationale’ style anthems: Bragg instead employs a lighter touch and manages to get his message across effectively when he needs to. Bragg’s voice soars above its roots-y, country-tinged backing deftly, the rough-around-the-edges Barking twang of his early records long gone in favour of a more American style. Recorded in South Pasadena with producer Joe Henry, Tooth & Nail is more reminiscent of his Mermaid Avenue recordings with Wilco than any of his other records; it is one rooted in a bygone, Dustbowl-era USA, coming from a time 80 years on in which the world has far from learned its lesson.

His reassuring, good old-fashioned leftism is found especially on ‘I Ain’t Got No Home’, a track popularised by Bragg’s hero Woody Guthrie. Bragg sings mournfully, adopting a persona of a “wandering worker” without a home due to the greed of the rich men who took it from him, doomed to walk the barren landscape in the hope of finding a living. The song is thematically falls into the dustbowl style adopted by many singers during the depression and its inclusion on the record has a significant poignancy given the current financial climate. Elsewhere Bragg sings of people “defending the indefensible ”, of “how the end begins” and rails against “the politicians who have led us to this fate” in a lyrical style that has become default for him.

But considering how, for want of a better word, fucked the situation in the UK at the moment, Bragg’s otherwise comparatively relaxed attitude is surprising here - although the record is far from apolitical, one would expect a more confrontational affair. This is by no means a bad thing; he is not contractually obliged to sing of nothing but the ongoing plight of the worker and his status as a veteran musician allows him his own artistic license. As such, Tooth & Nail is a largely warm and comfortable record that sees Bragg often playing the musician as opposed to the activist; reminding the listener how competent he is in the role of the former.

It is this crossover between personal and political songs that makes the record a success. It falls into the category of neither whilst still encompassing both; it is Billy Bragg as the politician and the person. The American influence of the record allows him to take a step back and look more objectively at the situation in the UK whilst also allowing for a more internationalist outlook to his politics; as such, and despite the occasionally more personal tone to Tooth & Nail, he continues his role as social commentator magnificently.