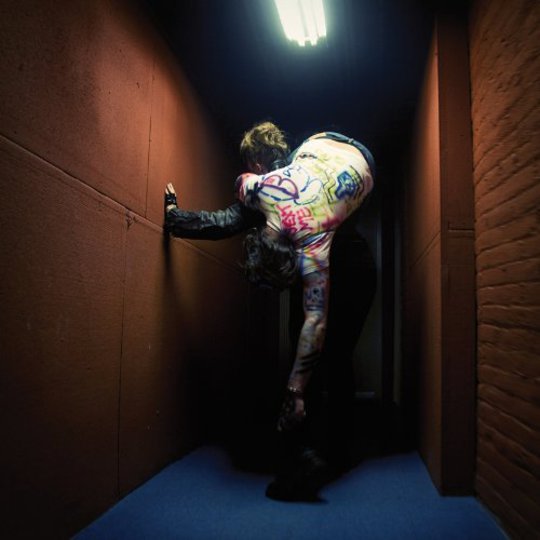 Now based in New York, until 2008 Pete was half of Portland duo Yellow Swans, who did nothing to confound stereotypes about American CD-R noise dudes by releasing music at a virtually uncataloguable rate. As someone who appreciated their blackly psychedelic rumble of bespoke synths and anti-rock guitar, but didn’t have the time or money to hear every Yellow Swans offering, they were always vaguely frustrating – maybe I was looking in the wrong places, but there seemed to be little consensus as to their essential releases, and they perhaps fell down the back of the noise sofa as a result.

Post-Yellow Swans, Pete has quelled his profligacy somewhat, while maintaining the impression that he’s still creative and open-eared. Two notable outlets in the last 12 months have been Sarin Smoke, a collaboration of abstract, boundary-free psych-rock with Charalambides’ Tom Carter (prior to Carter contracting pneumonia, from which he’s thankfully recovered) – and, conversely, music that appears to be the product of an increasing fascination with techno. This is where we find Punk Authority, a four-track EP and Swanson’s debut for Software Records. As with ‘Pro Style’, a 12-inch single which came out late-ish last year, these distortion-damaged loops represent a genuine desire on the producer’s part to get played in actual techno sets.

Time was this would have seemed a faintly absurd notion: even venerable technoists at the genre’s more punishing pole (Jeff Mills, Surgeon, DJ Rush) tend to be sleeker and more mindful of the dancefloor’s needs when they play out. Punk Authority’s title track, which opens the EP, has a clearly defined beat and, throbbing amidst substantial wreckage, a bassline. The distressed-sounding synth beeps and shuffling quasi-rhythms are imperfect, and intended to be that way. However, this approach isn’t necessarily anathema now: the boundaries between noise/industrial and techno are less defined than ever before, thanks to labels like Blackest Ever Black and Sandwell District, plus artists like Emptyset, Perc and Raime. Other American noizers are in on the action too. Wolf Eyes’ Nate Young has tried his hand at live’n’mangled techno as Moon Pool & Dead Band, which hasn’t made that big a splash; Dominick Fernow’s Vatican Shadow has accrued him electronic cred he probably never imagined scoring as Prurient.

Track two, ‘C.O.P.’, is on one hand utter circuit overload – starting off with the kind of helicopter-blade repetition that Whitehouse employed on their post-millennial albums – but on the other oddly wistful, with a keyboard refrain chiming away obliviously in the first half. Flatulent bass tones are stretched out and left to hang in the air, and by the last minute (of seven and two-thirds), it’s only that infernal ticktickticktickticktick that’s holding it together. ‘Grounds For Arrest’, at three minutes 36 seconds comfortably the EP’s shortest track, is a riot of booming, creaking horror electronics. Again maintaining a sort of order via a rhythmic core, it’s equally redolent of Source Direct and Maurizio Bianchi, which is an impressive act of matchmaking.

Nearly half the EP is taken up by ‘Life Ends At 30’, its 13-minute closing number, and it feels somewhat like an attempt to trump all that’s come before it: more distorted, more structured, more obviously techno-rooted. A kickdrum enters around the two-minute mark, carrying the monotonous thud of Nineties hardcore (as in rave, not the sort Swanson was actually listening to in the nineties) before being forced out by backmasked percussion loops, one-finger bass belches and the sort of grating midrange squawk that young bucks would probably flip for, if only it was on a Boys Noize track instead of this platter o’splatter (© Kerrang! magazine, late Eighties).

By the ninth minute, it’s legitimately rhythm-led, and bounding along at a fair old pace, although Swanson chooses to conclude it with a junky pileup of effects. Maybe that’s the part the DJ’s supposed to mix into something comparably gnarly and noise-derived, although I’m struggling to come up with many suggestions. Pete Swanson’s current techno mode – which he’s said is likely to be a passing phase for him – chimes helpfully with other broadly like minds of the moment, but he’s definitely establishing his own niche with Punk Authority.