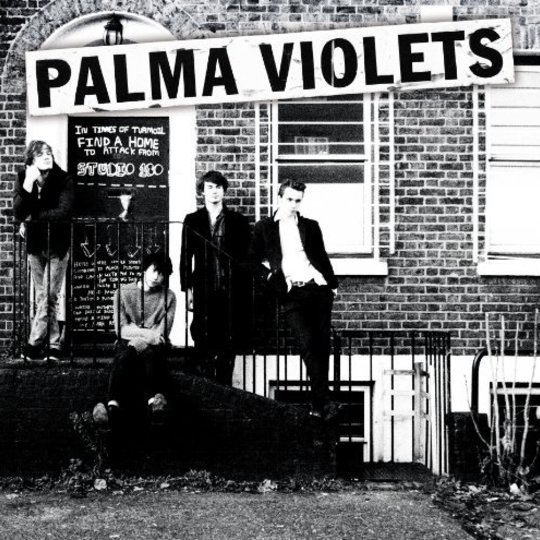 Pity the hyped band. Thanks to the breathless excitement of the NME and the knee-jerk blogger backlash that inevitably follows, it's difficult to - as George Michael would have it - listen without prejudice to 180 the endearingly scrappy debut from South East London indie brats Palma Violets.

There's a chunk of reviewers, hipsters and indie snobs who are desperate to hate this band, desperate for their shameless retro rock to go the same way as Terris and The Others and Joe Lean and the Jing Jang Jong and The Twang and a thousand other Carphone Warehouse-employed former cover stars. They’re willing this to be awful, and if they furrow their brows and sneer 'til their faces ache, that is what they’re going to get.

There's another group of listeners, and they're desperate too. Kids desperate for a band that finally means something, desperate to capture the energetic and energising live Palma Violets who stole the show at this year’s NME tour, desperate to fall in sticky lust with a band that’s finally for them. Many of these will get their way too, if they wish hard enough and dance madly enough then this is their year zero.

For the rest of us it’s a harder call. 180 has neither the critic-pleasing deft touch of the first Arctic Monkeys record, nor the myth and romance of the Libertines'. It's not a classic debut - it justifies no hype and changes no lives. That doesn't mean it's a bad record, just not a particularly special one. There's two thing 180 does very well. The first is feel and the second is bits.

180 is a record of great bits. Some of them last a whole song, as with opener 'Best of Friends'.Some of them are 30 second snatches, the raw throated opening of 'Jonny Bagga' Donuts' for example, or the sad and strange intro to the Beatley 'All The Garden Birds'. Often those bits pass in the blink of an eye before spinning into a scrappier idea, other times, as on the psych-rock, oddly mournful 'Chicken Dippers' the spiral goes in the other direction, ballooning into something grand and spiky at the same time.

But more than this, 180 is a record of great feel, a record with its heart in the right place. The band - along with their producer, Pulp bassist Steve Mackey - keep things simple and there's virtually no overdubs, a single guitar sits on a rumbling bass and organ giving each song a vintage, sessiony feeling. It sounds like a young band in a room having fun. In fact, it's youth and energy that gets Palma Violets off the hook here. Their worst qualities - a marked lack of focus, a reliance on shambolic chemistry over sharp writing, a shameless magpie approach to every indie touchstone (Velvets+Clash+Mary Chain+La’s+Libs) are all the sins of a young band, but it's that youth that lets them get away with it. Only a band in their teens and early twenties could make this record. What would sound cliched in more seasoned hands sounds fun here, they can pull off lyrics like "I wanna be your best friend" on the album’s lead single, or "gonna find myself a lady friend and stick by her until the end" on the baggyish 'We Found Love' and they come off as sweet rather than hackneyed.

Some might say this has come too soon, that they should have taken another year to sharpen and mature. I'm not so sure. Like The Horrors, or even Blur's first offerings, this is a snapshot of a band at a unique point. They will only sound like this once, they'll only have this energy and instinctive knack to let themselves be knockabout for a short time and it was worth throwing them in a studio to see what happened.

So Palma Violets get a pass this time, their lack of focus and their naivety balanced by their charm. 180 is a record they're only allowed to make once - next time we're going to need some substance.