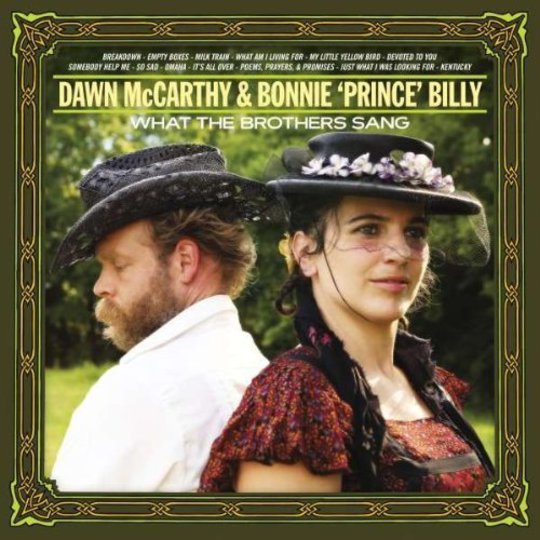 It would come as little surprise to many that Bonnie ‘Prince’ Billy is a big admirer of the Everly Brothers. But what is far more striking – when you go back and listen to some of the source material of this covers album – is how much of their stuff could already convincingly pass for the work of Will Oldham. Known primarily for the tight harmonies of flawless Fifties pop numbers like ‘Let It Be Me’ and ‘All I Have To Do Is Dream’, the Everly Brothers became looser and more relaxed as time went on, allowing themselves to move away from the rigorously intertwined vocal harmonies and showcasing themselves as individuals over the top of slightly more freewheeling country-infused music. Play the original and the Oldham cover of gentle Seventies cut ‘Empty Boxes’ side by side and, while you won’t exactly struggle to tell the two apart, you’ll be struck by the degree to which the vocal intonations and guitar styles naturally overlap.

For this reason, Bonnie ‘Prince’ Billy and Dawn McCarthy’s love letter to the Everly Brothers thrives within its musical comfort zone, but also feels the limitations of being a bit too cosy to take any risks with its source material. Where the originals happen to play to Oldham’s strengths, the results are predictably excellent. As with his own records, lyrical melancholy and musical sparsity are two of Oldham’s closest allies, meaning that lovelorn cuts like ‘It’s All Over’ and ‘What Am I Living For’ stand among the finest on offer, especially with the added emotional twist of a male/female dynamic from one of Oldham’s strongest foils. On similar grounds, little known ‘Poems, Prayers and Promises’ fits Oldham handsomely, with lyrics like “talk of poems, prayers and promises / things that we believe in / how good it is to love someone / how right it is to care” flowing from the same considerations of earthly relations and simple godliness which Oldham’s been weaving into songs for a career.

Missteps like the too-spunky ‘Somebody Help Me’ are forgivable upon reflection of the fact that, one or two anomalies aside, this is no attempt to reinvent the work of the Everly Brothers. It’s simply a modest and joyous showcase of their music. What The Brothers Sang plays like a lovingly made mixtape taken to the extreme: material so beloved that Oldham and McCarthy share it with you by actually performing it. And the sprawling, hit-avoiding track listing of the album bears this out – it’s like being guided around the discography of the Everly Brothers by two voices which know all its nooks and crannies, and where the treasure’s buried. It’s a little overlong and occasionally flirts with being a vanity project, but What The Brothers Sang draws great strength from how much Bonnie ‘Prince’ Billy and Dawn McCarthy clearly cherish these songs, and how much pleasure it gives them to share them with us.