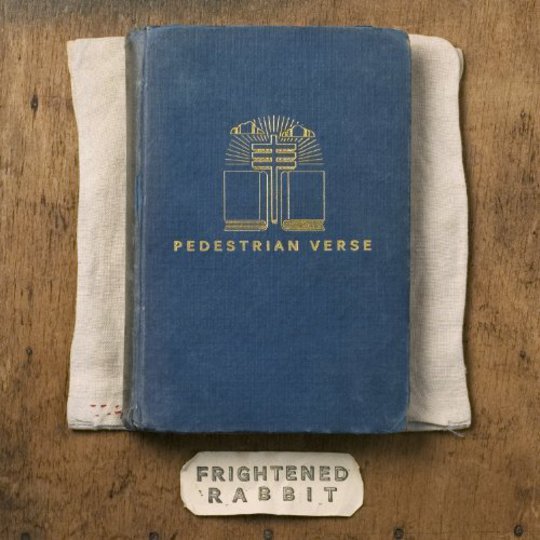 Like so many albums destined for underground classic status, Frightened Rabbit's second set The Midnight Organ Fight was wilfully idiosyncratic, painfully intimate, and the perfect soundtrack for the worst of times… just as they tip over to become the best of times, because all that going out, mixing drinks, and going home with the wrong people turned out to be a way of re-connecting, rather than hitting bottom. The Selkirk band's third album, The Winter of Mixed Drinks, caught a wave of good will, but was generally felt to be the band’s Neon Bible: bigger but not better. We grudgingly accepted that Scott Hutchinson was ‘Not Miserable Now’ and the surprising number of us who thought that Midnight was 'our' album contented ourselves that the (five-piece) band had become tight, powerful, and well on their way to being everyone else’s favourite, too.

On the surface, Pedestrian Verse continues the trajectory of its predecessor, but whereas the charm of the first two albums was an urgency that didn’t allow for polishing, and the third had been engineered to sound more expansive, the impact of the fourth comes from the quality of the songwriting. The depth and dynamics comes from the arrangements, rather than another layer of guitars. You can immediately hear the difference playing ‘Holy’ back to back with ‘Nothing like You’, one of the catchiest songs from album #3. Both share a ‘Teenage Kicks’-like riff, but whereas the percussion on the one amounts to a stick pattering on a snare’s rim, you can hear the whole kit in the latter; as each guitar, or keyboard, or bass-part rises up, presenting a counter-melody to the main riff, the music seems to be a city you’re flying through, getting a glimpse of different avenues with all their details and life, before soaring onwards. More importantly, while the sentiment of ‘Nothing like You’ amounted to 'yeah, I’ve moved on, so: nur-nur-nurnur-nur!' (which we all need to sing along to, sometimes) ‘Holy’ is delivered with a newfound tone of authority that says: 'Listen. I’ve figured out what my purpose is here. We’ve all got holes in our life but something as simple as a song can save your life. So, forget irony. Screw cynicism. I’m going to write a song for anyone who needs a Morrissey for their generation.'

That’s just one track, but you could say the same of almost the entire album: that they’re building on the best of what’s gone before, while adding a few more parts-per-song that don’t make them crowded but give the impression they’re evolving as they’re played. Plus, while the band started out lo-fi, they always had a sense of how to create a soundscape (often a seascape) you can visualize in detail. One of the most intricately constructed tracks is 'Oil Slick', which builds up an almost industrial pulse and clatter, with the single note of the backing vocals bursting like clouds of cartoon steam from an antiquated engine. The lyric deals with the way that songwriting can become work like any other – dehumanizing and mechanical – until there’s a breakthrough at the end, and the harmony vocals finally regain their humanity and hope.

If there’s one word for the album, it’s focused. Yes, it’s a step forward – but just the one, and some of the omissions feel like a sacrifice. Gone are the long intros and outros that added a little suspense to Mixed Drinks, and so are the instrumental breaks or reprises (‘Bright Pink Bookmark’, ‘Man/Bag of Sand’, etc.) that acted as a breather. The mandatory pair of tracks that come in under two minutes are songs proper, you’ll be pleased to here; compressed narratives that seem to be speaking up for the people living in the cracks of life who’ve been hit by recession. On the other hand, there’s nothing like the traditional folk songs of the (excellent) Frightened Rabbit EP. There are still places to go, but this is an early contender for album of the year.