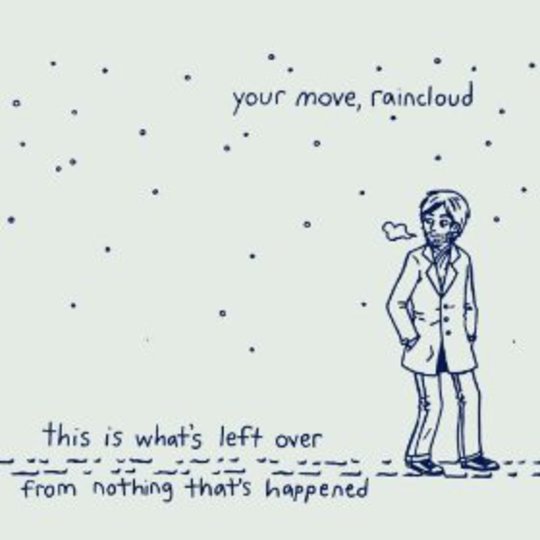 The sweeping, string-laden epic is not an easy album to pull off. When a band spends nearly half a decade working on such a beast, as Lincolnshire’s Your Move, Raincloud have, there will inevitably be some issues of indulgence and, in the kindest way possible, overthinking of the concept – in this case a loosely connected sonic novel touching on themes of nature, loss and modern dislocation.

Your Move, Raincloud are clearly a band is enraptured by the grand sweep and swell of slowcore, the sepia-tinted sway of folksy emo and the bombast of octave hurdlers and heartstring-tuggers like Shearwater and The Antlers respectively. They appear to have spent the last four years slotting these elements together in the manner of an ill-judged musical puzzle to create their full length debut and determinedly enveloping themselves in the pleasure they take in the results.

The songwriting of Samuel Francis Cain is initially tough to evaluate – especially when confronted by the tweaking nasality of his voice. It’s hard to measure how effective a record this could have been were it not for the instantly jarring factor of Cain’s none-more-affected American whinny. The whimsical, lip-smacking instrumentation on songs like ‘Double Exposure’ provides a brief respite from these grating vowel sounds and forced, clumsy cadences – but when the dam breaks and the pedals are stamped on, like so many of the songs here it collapses into bloated cliché and repetition.

The samples of motorway sounds, of waves, of thunder cracking and of radar blips that bridge the gaps between almost every song here (and fill several of them too) typify the kind of overly enthusiastic kitchen-sink inclusion that ironically detracts from what could have been a much less oppressive, tiring record were the reins pulled in, the quality control button switched on – were there someone in the room shaking their head and just saying ‘no’.

Exemplifying the worst facets of the album is its centrepiece – the nine minutes and 54 seconds of the interminable ‘Word Association’. If you want to really upset yourself, listen to how Cain pronounces “documentary here. It’s teeth-gnashing stuff. Closing on a borderline meaningless loop of lyric “these plans I made were never real/these plans I made I practiced for you/to be the best part of/these plans I made” that bumbles inevitably into a swell of strings and a sample of rain falling on glass, this is the kind of thing that happens when ego goes unchecked and talent is squandered in pursuit of the forced emotional response; the grandiose heartbreak moment. It never comes.

Offering promise is the use of Alison Mure’s rich voice on ‘From The Minute I Heard My First Love Story’ and closer ‘They’re In Each Other All Along’, both of which are firmly entrenched in cliché (field recordings of fireworks being set off for instance) but sound less muddled and forced than many other tracks here by virtue of the clarity of her tone – in contrast to Cain it’s natural and she delivers her lines with breathy ease.

There are more cutesy Decemberists tropes dotted around the album than one could first think possible – the sleigh bells of ‘Bubbles’, the bluster of ‘Not Realising How Blind I Was’ and the cod poetry of lines like “I wish we’d met in ten years time / I wish we’d met when we were 5 / but when we meet then / it’ll be like we met then which grasp at greatness but end up painted into a confused corner.

It’s a frustrating exercise to go through This Is What’s Left Over From Nothing That’s Happened hearing just where things went wrong, precise moments where ambition tips into bombast and all sense of subtlety is lost. That there is some potential here is not in doubt – but a firm hand to calm the histrionic tendencies is required before they venture into the studio once more.