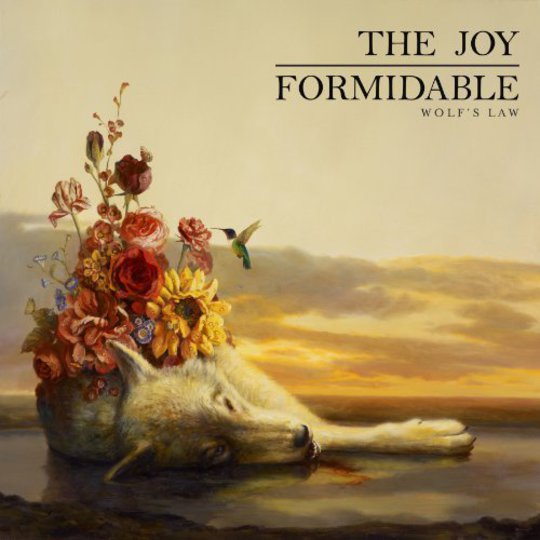 Who wants to be the biggest band in the world? On the evidence of their second album, The Joy Formidable really want it. The group supported Editors and Passion Pit on the strength of a very fine mini-album, and then Muse for most of last year, so their plan for world domination is evidently underway. In the month of lists and tips for 2013, it’s a fair question, but DiS readers will already be asking themselves “why ‘biggest’? why not anything else?”

Last year, the band’s debut, The Big Roar, was one of my most played guitar albums, until The Unwinding Hours overtook it by a nose, on the final stretch. The Joy Formidable are a Welsh band (although you wouldn’t necessarily guess it), and The Unwinding Hours, Scottish (although you wouldn’t necessarily guess that either). Pondering a 'Lost Albums of 2012' piece, it seemed likely that both bands had honed their craft away from London and its pay-to-play policy, while being determined to proclaim their existence from a larger stage. Both bands pushed enough of my buttons – or stamped on enough effects pedals – to earn plenty of plays on shuffle; at the gym, cycling around the city, what have you. (They didn’t get as many deliberate plays as Swans, Scott Walker, or Soap & Skin, but let’s be honest: we can’t be avant everyday.) The thing is: neither band has the sense of regionalism that I’m increasingly convinced is integral to a lasting reputation (Idlewild, Frabbit, the Manics or the Furries). Accents, idiosyncratic lyrics rooted in a place and time, occasional borrowings from folk-songs… all are missing, in favour of a radio-friendly gesture at universalism that often ends up anonymous.

The Joy Formidable sound huge, and they’re hugely catchy – don’t get me wrong. If they’re playing support at an arena gig, or third-from-top at a festival: go see them. The production tells you this record was made after the ascent of Peter Katis and Jacknife Lee, but the songwriting and individual performances are, in a word: Britpop. This is basically the sound of 1995/96; a time when indie-rock bands eschewed trashiness in favour of string sections playing glissando, keyboards that mimicked much the same sound, and the occasional sensitive acoustic ballad. It being 2013, The Joy Formidable are so loud that their combination of punchy guitars and sweet-voiced female vocalist comes close to metallers like Battle of Mice, but whereas BoM are a radical challenge to what metal is and can be, TJF are a mouse with a megaphone. They’re Catatonia or Republica, 17 years on.

The words on this record seem curiously divorced from the sentiment, just as the band play fine but seem to have been scripted to GO LOUD 47 SECONDS IN (say), rather than generating excitement from a continual interplay between each instrument. The most revealing lyrics are “Where are we going?” on the chorus of the lead single, and “Maw Maw Maw!” on ‘The Maw Maw Song’.

Sounding big may be a pretty good way to get a support slot with the biggest bands in the country and, in time, the world, but after a point you need more to say.