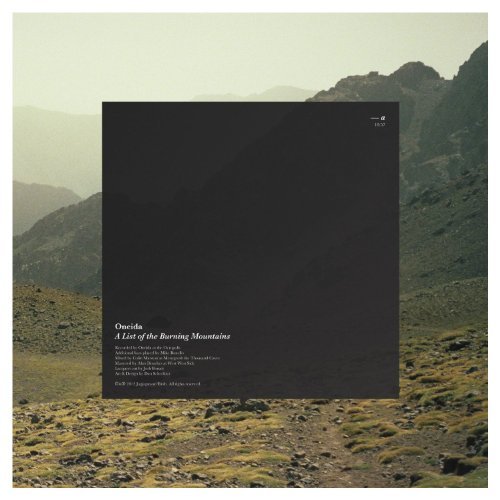 A List of the Burning Mountains resembles a small, amputated segment of one of Oneida’s mammoth Ocropolis jams, although not necessarily the best bit(s). The overall impression is that the improvisation was more enjoyable to perform or to witness at the time than to listen to after the fact.»

'a list of the burning mountains' is the latest studio album by brooklyn psych / noise / kraut godfathers oneida. it was recorded at the ocropolis, the band's longtime studio, and it is a powerful, sweeping gesture that evokes the storied history of that space and oneida's dedication to a diehard independent music and art community in fashion-driven brooklyn. this is true underground sound from a band that has released twelve albums in fifteen years and has been hailed by the new york times, npr, time out ny and the village voice as an original, essential voice in the history of new york's towering experimental music lineage. brutal and gorgeous, churning and soothing, 'burning mountains' is less a traditional album than a tiny sip from an endlessly roiling sea. oneida is known for long-form improvisatory performances and collaborations; this release, with its drunken-master drumming, howling guitar and scouring drones, serves as a concentrated blast from a wholly unique band known for 12-hour live, improvised performances and multi-day recording sessions.
description from www.roughtrade.com