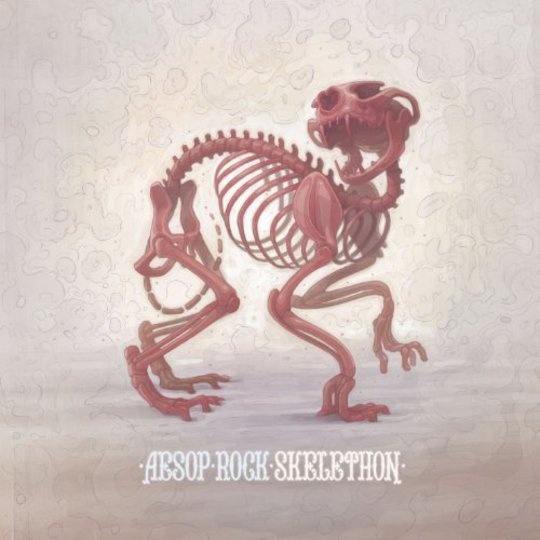 It first hit me that this record needed my undivided attention just as it was about to finish. I'd been trying to decipher the lyrics when all of a sudden the cryptic choruses and abstraction just stopped, leaving a passage of direct, simple words in their void. In the penultimate verse of the record, we get to see the man behind the metaphors laid bare and it's heartbreakingly honest. Writing them here would be a waste without all that goes before (a little like ruining the ending to Psycho) but such was their impact I felt compelled to listen even more intently.

For Skelethon is the kind of record an artist only makes once in their career; the culmination of long-gestation, departing loved ones and having to innovate out of your comfort zone. And Aesop Rock's recent turmoil is very much our gain.

Its impossible to dissect an Aesop record without dwelling at length on the lyrics. 'Lyrics' doesn't begin to do them justice, in truth they're more like dense prose or poetry. There is so much going on within a verse of any track here that several months on, I'm not entirely sure what some of it is about. In these times of instant gratification and downloadable mixtapes, Aesop Rock is a relative enigma; a reminder of hip hop's literate past, concerned more with having points than posture. Skelethon sees the protagonist coming to terms with a variety of issues all revolving around death; from a close friends absence via ended relationships and conversations with his father when stopped from going out to play as a young boy for not eating his greens on 'Grace'; "Yup / I told them he were busy / He staring at his green beans being a total pussy".

The minor miracle about all this is that at no point is Skelethon a bleak record. Even when the lyrics are at their most sombre, something else gives the track in question a touch of levity. Sometimes it is through trying to work out what his attitude is to these situations, such as on 'Homemade Mummy': "I feel that mystifying times have gotten ugly / I also feel that you can learn a lot from a mummy / Take the brain out / Leave the heart in". Twice this is down to the involvement of Kimya Dawson (of Moldy Peaches fame), through her throwaway observation of "Dude, it grows back" in the affectionate 'Racing Stripes' (an ode to a questionable haircut departed friend Camu sought out) and her charming outro to the otherwise heavyweight 'Crows 1':

"And they call to let you know your friend is dead in a box... / I'm not gonna rot, no, fuck that snot / You can let them let you rot, man / But I'm not going to watch / I'm not gonna stand atop your plot / I love you friend, but I'm just not / On the other hand if your ashes are scattered in the sea / I will swim in the sea and you'll be with me"

At others it's just a piece of brilliant instrumentation, a pregnant pause or a solitary word, such as the delayed delivery of "Oh..." on the realisation of what he's just done on 'Gopher Guts'. Equally it's a record that isn't afraid to come out fighting. When he says: "Armchair hater I wouldn't piss on your coffin but when I see your picture I draw dicks on it" on 'Tetra' it feels like a personal triumph.

Its hard to not dwell on wordplay with an Aesop Rock record, but a huge amount of what keeps me coming back to this album more than some of his past releases is the variety of instrumentation and sampling. The change of pace when the twinkling piano comes in during 'Cycles of Gehenna', the brooding bars of 'Ruby '81' or 'Zero Dark Thirty's' ability to shift gear when it needs to are all moments that speak volumes on how far musically he's come. Indeed the pacing is impeccable from start to finish, an impressive feat given that this record is a first attempt at self-production.

Like its creator, Skelethon comes full circle. Within seconds of chuckling to "Wore the same hoodie everyday like Mumm-Ra - ba-boom-tish", the opening bars and latter lyrics of the album finale bring with them a bittersweet reminder of how this record largely came to exist. Thankfully sometimes, the more you have to put in, the more you get out.