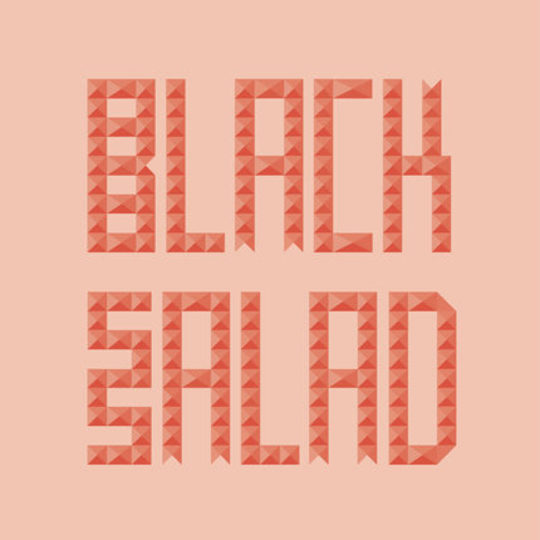 Kieren Dickens possesses a rare psychological fluency as DELS. He self-analyses with systematic precision. Moments of shallow relief and unironic humour are hard to come by on this five-track EP, while the surrounding beats (courtesy of Kwes, James Spankie, Rasia K & Thomalla) are deep and oppressive, like tunnel walls framing the distant blazing light. Abandon yourself to the playful whims of his slipstream, however, and it’s easy to let slide the loose ends, the interludes, the vaguenesses - these being the perennial burden of the between-album stopgap, so perennially misrepresentative, businesslike, contractual, so perennially, ooh, six-out-of-ten.

Which this is not. Black Salad strides forth with a worldly wisdom that belies Dickens’ Suffolk roots - and an occasional modesty that suits them. Modesty being relative, of course. These songs are, by the man’s own reckoning, “peppered with hidden meanings and clean-cut clichés”. But hey, this is still DELS, and at the heart of it all DELS loves to show off. And at the hulking, big-picture heart of it all, who the fuck doesn’t? And here is the new DELS way of showing off, modestly: no Joe Goddard productions, no Micachu, no Roots Manuva. No matter. Even Kwes, the post-grime wunderkind behind a swath of DELS’ 2011 debut, Gob, slinks off after his opening brace of tunes.

The second of which is ‘Bird Milk’. It’s the high-watermark. It welcomes a hyper-reflective, point-making DELS, still repping those belching, crashing beats and still distracted by the fiery ecstatics of the DELS imagination. Whether being “strangled by spaghetti” or having “Newports stubbed in my eye sockets / With my palms in the sky, screaming like ‘Stop it!’”, the intent is clear: escape, escape, escape. And it’s precisely this, this double-edged bump key to the brain’s darkest corners of escapism, that proves a persistent wonder.

That’s not to say the boy Dickens has any problem staring out his issues face-on. On GOB cut ‘Hydronenberg’, a deskbound DELS was in a hangover-induced strop at his boss. ‘Not Today’ widens its net to a profound, degenerate and bottomless sense of class-A despair:

A grim listen, then, but one propelled beyond stoned malaise by the necessary undercurrents of optimism and sheer strength of will. The quality’s nailed, basically. In terms of quantity, however, that’s... pretty much it. ‘Sell By Date’ and the Kwes-produced title track are effectively instrumental, leaving the lugubrious ‘You Live in My Head’ to round off a trio of full servings that feels slightly diluted within the EP’s 16 minutes, like a particularly promising salad dressing that didn’t quite boil down. DELS is yet to grow into the hype, or at least the hype I have internally thrust upon him. But for those whose quotient for socially conscionable rappers with a morbid existential streak remains unfilled, Black Salad is adventurous enough to squint into the oncoming light at the end of DELS’ tunnel, while leaving the listener free to interpret its form for themselves.