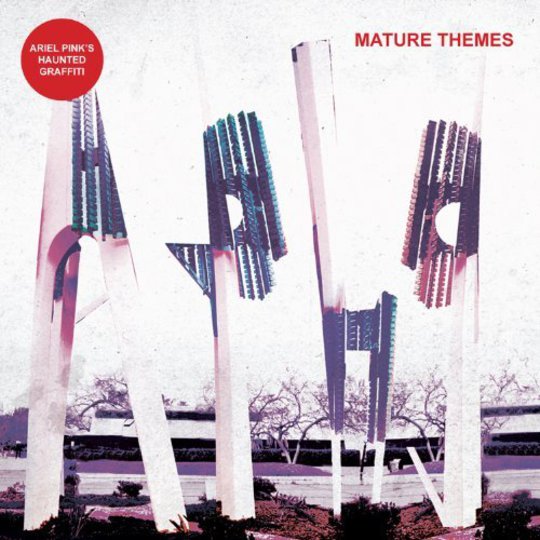 I thought that 2010’s Before Today would be a tough act to follow. This, of course, was the last record we heard from Ariel Pink’s Haunted Graffiti – and their first after ascending to the ‘big time’ (that is, signing to 4AD). Don’t get me wrong, it wasn’t perfect. But as a mad ensemble of sounds from different times and places and worlds, ideas selected from a vast id and pasted together to produce some of the most gorgeously surreal alt-pop songs around, it felt like the painstaking work of a lifetime; a single, defining magnum opus lying somewhere between the slightly accidental genius of a crystal meth addict dismantling a TV, trying to put it back together and actually succeeding, and the real genius of some old-geez-genius like Mozart.

But it was no great accident, not really. The end result of weaving all those bits and pieces together was an album both sexy and slightly nightmarish, a deliberately irresistible combination. And though feeling like a sleeker, altogether more confident animal, Ariel Pink’s Haunted Graffiti's second major studio release pulls the same trick.

They sounded then and now like some lost band from the early Seventies whose damaged recordings have been found lurking deep within some bottomless hard drive and passed off as new by those evidently unscrupulous bastards at 4AD… though a Seventies band from a different history in which the Nazis had won the war but ultimately lost the US during multiple uprisings throughout the Fifties that resulted in a kind of Mad Max Americana… or a Seventies in which the far-out freaky generation had prevailed or at least not been utterly crushed by Nixon and the forces of Conservatism… or, like, both meshed together with bits of our universe, and alien messages, and paranormal footage.

But maybe the only reason ‘Seventies’ comes to mind is because that was such a muddled, splintered decade for Western music – disco, prog, metal, punk – a bit ageless and postmodern blah blah, and that’s kinda how this record sounds. The title track’s jingly tenderness hints at Simon and Garfunkel, only with a bit of squawking-lead guitar on top and spacey keys. ‘Only In My Dreams’ is almost Sixties boyband fare – “If at first you don’t succeed at love/ just dream a little, dream about a girl so real” – but could also be some innocuous bar-band from Nineties mid-America. It’s like Ariel has deleted the original artists from existence and goofily drooled globs of vocal over their recordings so as to pretend their songs are his own. That’s actually pretty much exactly what he does on ‘Baby’; breathing new life into Donnie and Joe Emerson’s forlorn-sounding, soul-classic wannabe, ‘Baby’, Ariel’s lush cover is like a memory of something far exceeding the actual event, a fake history for that which never was.

The likes of ‘Mature Themes’ and ‘Only in Dreams’ aren’t as spliced and id-tastic as, say, what-the-fuck-opener ‘Kinski Assassin’ and its mind-spunk lyrics: “Kinski assassins, double agents in Athens”; “Polymanogamasturbators ahoy / like young Sigmund Freud”; and “Suicide dumplings dropping testicle bombs”; all topped of with the refrain, “I will always have Paris”. But even with the straighter, less ‘problematic’ pop songs, a ghostliness remains – the same ghostly feeling that pervaded Before Today. I’m constantly wanting to sift through the layers built up on each track, the deliberate, careful ageing… I want to get hold of that tape recorder Bruce Willis uses in Sixth Sense, the one that’s seemingly so sensitive it can pick up the voices of spirits, and find out what’s really going on.

This ghostly thing is what binds Mature Themes’ disparate songs together. For example, there’s a pretty big jump from ‘Early Birds of Babylon’ – a kind of circling, doomy cult-chant, “Satan express” droned mindlessly over an eerie background of whistles, distant screams, horror-film keys – to the silly, puerile pop of ‘Schnitzel Boogie’, which descends after 1:30 into schizophrenic desperation, Ariel wailing “schnitzel” into the abyss. Yet they're comparable in that they’re both subtly haunted, those ghouls and demons lurking just beneath the surface, peeping above.

I imagine whole worlds in these songs, failed histories, unbridgeable gulfs of fascinating insanity – there’s just so much fucking happening all the fucking time. “Step into my time warp!” Ariel mutters creepily on ‘Is This The Best Spot’, and that’s how I see him, ever enticing you to come on another of his ridiculous journeys: there he is, crawling into the cracks between dimensions, performing at the points where parallel universes converge, alternate histories and skewed realities spilling into his recordings, concealed within them; perhaps, in fact, their true purpose.

Before Today was a tough act to follow – and so it’s been followed with more of the same. But more is the operative word: Mature Themes is more detailed, more developed, more everything than its predecessor. It’s nauseating and beautiful, troubling and hilarious. Be warned.