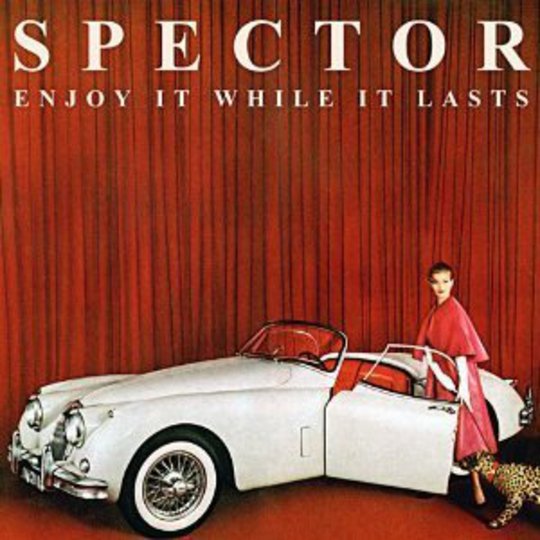 "You know I'll never fade away" croons Fred MacPherson on Enjoy It While It Lasts's twelfth and final track, and if past history is anything to go by, he may well have a point. Having spent the best part of a decade experiencing the fickle nature of the music industry with both Les Incompetents and Ox.Eagle.Lion.Man, you could forgive Spector's frontman had he decided to give up on making music and try his hand at something else. By the same token it would also be hard begrudging him a degree of success with his latest venture, if only for sheer perseverance.

But then judging by the title of Spector's first long player, one suspects he's fully aware of this himself. After all, why else would he have called the record Enjoy It While It Lasts? Part tongue in cheek, part stark realisation. Despite belief to the contrary, it hasn't all been a bed of roses for Spector. While last December's nomination as one of the BBC's Sound Of 2012 helped raise their profile considerably, it also made them an easy target for both critics and other musicians alike, many undoubtedly envious at their seemingly sudden rise in prominence. Then of course there's outspoken frontman MacPherson himself, never afraid to voice his opinions on anything and everything via the medium of Twitter and anywhere else that will give him the time of day. Dismissive of unambitious guitar bands, he's already been quoted as likening Spector to The Beatles ('We write pop songs, they wrote pop songs'). But then when all's said and done, it really is about the songs.

So, having spent the best part of six months working with various producers, the burning question remains: is Enjoy It While It Lasts any good? Well, yes and no really. Anyone expecting some kind of musical year zero will be bitterly disappointed for starters. Not that Spector have ever claimed to be the most original band on the planet or shied away from their influences. At the same time it's that level of familiarity coupled with MacPherson's savvy way with words and his band knowing their way around a tune or three that proves to be Enjoy It While It Lasts's saving grace. If its something complicated and unhinged like Animal Collective or Grizzly Bear you're after then you really should turn away now. Instead Enjoy It While It Lasts is littered with reference points ranging from The Killers to the Kaiser Chiefs via Maximo Park and back again. Almost a throwback to the early Noughties, an era which the diminutive frontman admits pretty much shaped his musical tastes, its a record that will both elate and infuriate in equal measures.

At its finest, and there are a good half a dozen genuine pop nuggets here, Enjoy It While It Lasts bristles with an infectious energy fully justifying the hype bestowed on its creators. 'Friday Night, Don't Ever Let It End' should come with a stamp of approval from the association of daytime radio producers if one exists. 'Twenty Nothing' too wraps a nifty melody around some of MacPherson's finest lyrical asides, its chorus line "I'm going back to the things I love" pretty much reiterating his statement of intent. Meanwhile the pulsating adrenalin rush of 'No Adventure' could double up as Spector's epitaph, MacPherson proudly announcing "We're too old to die young" like a veteran engaging in a spot of role reversal with The Who's 'My Generation'. Former singles 'What You Wanted' - familiar to anyone that's seen the band in the flesh as the regular opener for their live show - and 'Chevy Thunder' also pack a punch, albeit a sweet toothed one, particularly the latter which kind of resembles Ed Sheeran's 'A Team' in its breakdown towards the final third.

Add the closing 'Never Fade Away' and punchy 'Celestine' and it's a case of so far so good. Unfortunately, lodged in between, there's also an abundance of filler that doesn't quite match those levels of consistency. Opener 'True Love (For Now)' lacks the bombast to kickstart Enjoy It While It Lasts into life, while the balladeering 'Grey Shirt & Tie' sounds uncomfortable rather than sophisticated. Likewise 'Upset Boulevard' could be a Kaiser Chiefs b-side from their Yours Truly, Angry Mob era while both 'Lay Low' and 'Grim Reefer' are instantly forgettable.

Nevertheless, Enjoy It While It Lasts has enough flashes of brilliance to suggest Spector may be around for a longer haul than their detractors would hope or like. Given time, and with a bit more focus on quality control they may just realise the obvious potential that exists.