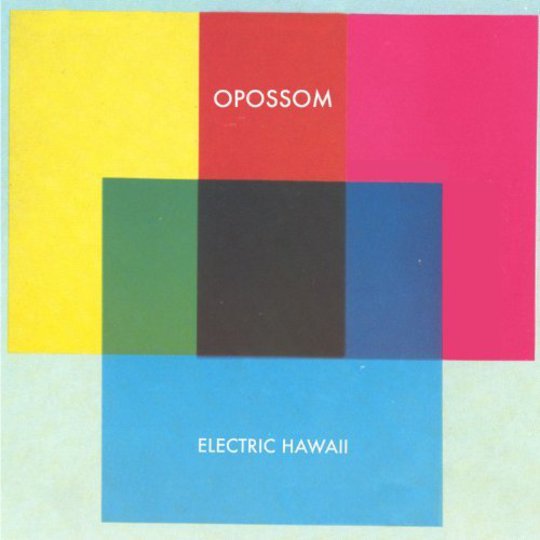 I’ve had Opposom’s debut album, Electric Hawaii, on repeat the past few weeks. With each day, I’ve tried to make sense of its towering percussion and filtered guitar work. I’ve wondered why this project is so imposing, when it mostly emanates from one man: multi-instrumentalist Kody Nielson. Enter ‘Inhaler Song,’ the album’s methodical closer: at the two-minute mark, its stark clarity and hallowed echoes give way to an almost inaudible procession of booming drums and haunting synthesizers, the likes of which felt like Godzilla stomping a fictitious city. For a second, I thought my speakers were broken. But that’s why Electric Hawaii works: it's an artistically free record, containing some Brit-rock, a little pop, and Sixties soul. Yet it all feels natural; you can’t ask for more than that.

Above all, Hawaii boasts a much cleaner sound than Nielson’s previous work with The Mint Chicks, which ascended to prominence in New Zealand with primitive punk-rock. There, the edges were a bit rougher and the messages more strident. Once the band split in 2010, Nielson set his own course as a producer for two New Zealand acts: pop vocalist Bic Runga and garage band The DHDFD’s. On his own, the frontman opts for psychedelic fluidity. The songs on Hawaii feel like they were recorded in Hawaii, or at least with The Aloha State in mind. The instrumentals are somewhat distorted, yet they all hit the mark with captivating drums and sparkling keys. Elsewhere, the tracks contain a cannon-like quirk — auto-tuned vocals, cosmic synths, and twinkling chimes are key components. Simply put:Electric Hawaii is the anti-Mint Chicks. Vestiges remain, but I doubt Nielson will smash his guitar or chainsaw the stage after singing ‘Fly’ or ‘Blue Meanies.’

Or maybe he will. If he does, it’ll probably follow ‘Cola Elixir,’ a song that begins as an innocent alt-rock tune of dusty cymbals and hollow garage funk. From there, Nielson revisits his punk roots and repurposes the track as a head-banging concoction of crashing thumps and ominous guitar chords. Yet by the next tune — the atmospheric title track — Nielson calms down considerably with sugary keyboard stabs set against an airy backdrop. There’s even some Jimi Hendrix on here: the soothing ‘Outer Space’ resembles The Voodoo Child circa 1967. Close your eyes, and these drums resemble Mitch Mitchell’s; the regal keys punctuate the song’s celestial approach.

Nielson recorded Electric Hawaii without much help — just a guest vocal from Bic Runga and trumpet work from his dad, Chris. So that makes Hawaii an exercise of independence, which also explains the great DiY feelings stemming from this project. From its quick runtime (30 minutes) to its psychedelic pop affinities, this is one of the year’s most refreshing albums of any genre. This is a kinder Kody Nielson, one who doesn’t sound as agitated or restless. Instead, he replaces the petulance with meditative longing set atop nostalgic compositions. In doing so, Nielson takes significant steps toward crafting his solo legacy as a multifaceted musician. You can’t be a punk forever.