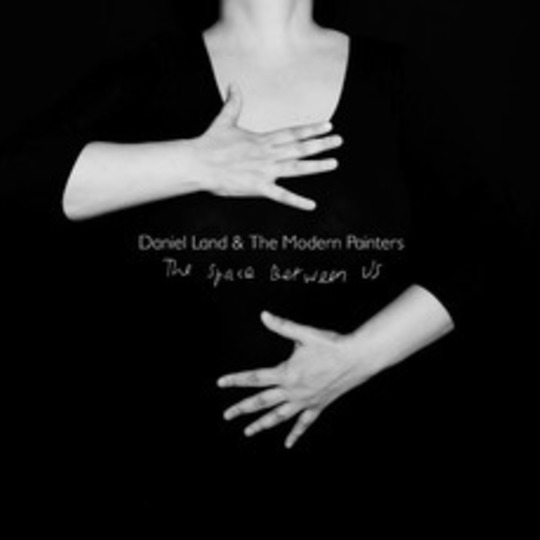 As lead guitarist in The Steals and sometime bass player with Engineers, Daniel Land has earned the title of Mr Versatile with gleeful abandon. And that goes without mentioning his ambient piano-based side project riverrun, whose excellent Pentimento long player escaped virtually unnoticed a couple of years ago. However, it's his day job - if that's the most appropriate descriptive - as frontman and principal songwriter with The Modern Painters that he first made his mark. Debut long player Love Songs For The Chemical Generation may have been released as far back as November 2009, yet it still holds court today as one of the finest shoegaze tinged, ambient guitar records of its time. Combining swooning vocal arrangements with textured melodies, its content mainly depicting Land's harmonious relationship with his then partner.

Unfortunately if its predecessor documented all that was good about Land and his former beau's partnership, then The Space Between Us most definitely serves its purpose as a bittersweet chronicle of what happened next. Recorded last year in his native city of Manchester, The Space Between Us is a long and fairly drawn out affair taking in nine individual pieces, all of which use metaphorical language ('Cherry Bark & Almonds', 'The Hawk & The Nightingale', 'Starfish Fucking') to tell their own part of the jigsaw. Having already declared in a previous interview last year that The Space Between Us would be a more stripped down affair, and therefore less reliant on the wall of sound shoegaze elements of his previous recordings, he's stuck true to his word here. Several of the songs here take the form of semi-acoustic laments, perhaps more fitting considering the lyrical content as well as highlighting yet another string to Land's ever increasing bow.

While the dreamy 'Echo & Narcissus' is perhaps the closest Land & The Modern Painters get to Love Songs For The Chemical Generation in style and sound at least, its belligerent message would suggest its creator's focus was significantly more downbeat. While 'The Silver Medal' takes a more optimistic path, its acoustic-led strum veering into Galaxie 500 territories, the delicate strains of 'Starcrossed/Butterfly Lovers' find themselves awash with thinly veiled references to Land's former object of desire. 'Lovelife' also takes the tempo back down a peg, Land asking solemnly "So what's the score here?" over an emotive, introspective melody. At times uneasy listening, yet by the same token an utterly real statement of intent, one suspects The Space Between Us must have been quite a harrowing record for its creator to deliver.

It's at the album's midpoint where the record really comes to life. 'Cherry Bark & Almonds', with its refrain of "I'll try another girl" obviously questioning the denial of one's sexuality, backed by a mournful orchestration whose chords could probably spell out regret were an 'R' or a 'T' to exist in musical notation. 'Sleeping With The Past' also builds a pulsating tone around its jaunty melody, even if the lyrical sentiment doesn't quite match its carefree structure.

Lead single 'Eyes Wide Shut', an odd choice for a 45 considering its apologetic nature, returns The Space Between Us to its more eloquent, reflective standpoint. 'The Hawk & The Nightingale' meanwhile takes the middle eight from Wham!'s 'Last Christmas' on a blindfolded date with Slowdive's back catalogue, Michael and Ridgeley coming a poor second best to Halstead, Goswell et al during the song's swooping finale. It closes on the epic 'Starfish Fucking', which clocks in at a whopping 13 minutes and rivals The Field Mice's 'End Of The Affair' for malevolent heartbreak. It's a dramatic, if occasionally spiralling exit for The Space Between Us_, but also one which exorcises Land's personal demons on this record once and for all.

Painful, yet brutally sincere from start to finish. Just don't expect to hear The Space Between Us at a celebratory reception any time soon.