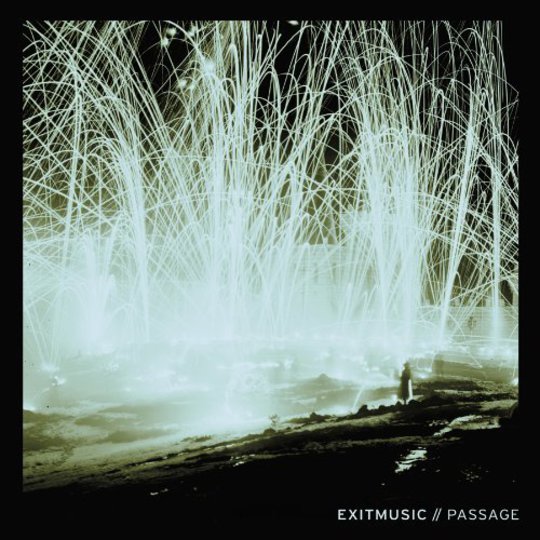 Interesting idea, calling your band Exitmusic. The music that soundtracks the final moments of a film as the actors disappear from the screen, as the credits roll and the audience take in what they’ve seen, is meant to be poignant; it’s meant to reinforce the feelings aroused by the film’s resolution (or lack thereof). It’s the music of reflection, consolation and/or summation.

This Brooklyn four-piece, then – centred around founding bandmates Devon Church and Aleksa Palladino – have made an evocative choice in nomenclature, suggesting that theirs is the music to end stories, to accompany the completion of an emotional (one way or the other) journey. It’s clear from the start of debut album Passage that they’re striving for the epic, the panoramic, the intransient – what ambition! At times they manage it, like in the opening title-track when the surround-sound of shimmering guitars and echoing percussion swells at the very moment Palladino’s vocals rise for the line, “You’re so in-credible”, his voice cracking all along the last drawn-out syllable. Or when the lone guitar in ‘The City’ suddenly collides with a wall of stormy noise, like a forest of towers crashing together.

But too often they don’t quite get there. In mid-album numbers, ‘Storms’ and ‘The Wanting’, the multi-track layering, embellished with thick coats of reverb and delay (courtesy of Deerhunter mixer Nicholas Vernhes), doesn’t disguise the fact that the central melodies are fairly basic. Which isn’t necessarily a bad thing.

Not to paint a misleading picture – when the vocals are soaring, top-of-the-lungs fare, practically screamed, the distortion works a treat. What’s more, Palladino’s voice has much in common with Zola Jesus, who also frequently uses heavily distorted vocals. It’s just that when she hushes in with her unmuddied “ah-ahs” at the close of ‘The Modern Age’, I sense that there’s an unaffected, distinct vocal talent hidden here, and I want to hear more of it, up close and personal, like.

What films would these ten songs close, then? They wouldn’t be epic in the classical sense like Gone With The Wind or Spartacus; or in the postmodern dystopian manner of Blade Runner. No, I’m thinking they suit best the epic melodrama of certain indie films, especially those that aim high, but are essentially a little frivolous – you know, there’s some quirky guy who likes a quirky girl, and they have lots of quirky dialogue, and then there’s the bittersweet ending, and it’s meant to be an exquisite work of art. Like many such films (they exist, right?), Passage is endearing, with unforgettable peaks; it looks beautiful at first glance, and has no shortage of beautiful moments, but don’t delve too deeply lest the mirage of a grandiose masterpiece dissolve.