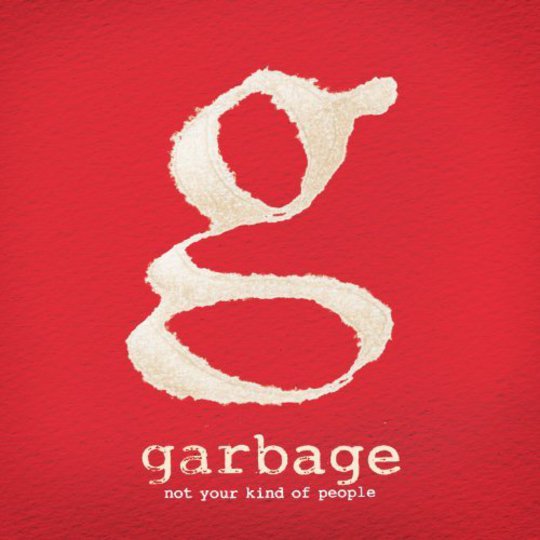 You always get the impression that while they could never entirely decide what sort of band they wanted to be, Garbage were essentially a melodramatic pop group who the industry tried to make more heavyweight by mentioning 'Nirvana producer' lots and dressing in black. But after that (still very good) debut album, they broke free of those trappings, with each subsequent record getting slicker and more easy to digest. After four albums and a hiatus or two, Not Your Kind of People arrives.

And as you'd likely expect, they're still as confused as ever. The cover gives the impression of the band returning to their post-grunge roots, which could barely be further from the truth. The album introduces a whole bucket load of new (over) production techniques that mean there's no real flow to it. There's the now compulsory ballad that isn't much cop and the couple of belters that bolster their admirable singles back catalogue yet falsely give you hope that they might still have a brilliant album in them.

For they can still write a decent chorus and there is much to like. The way the guitar soars out of the MBV mix on 'Felt' is pretty awesome. Opener 'Automatic Systematic Habit' is as great a three-or-four-tunes-rolled-into-one indie song as I've ever heard. 'I Hate Love' has a great bleepy keyboard bit in it. And 'Man on a Wire' is a bonafide gem.

The title track and 'Beloved freak' are TERRIBLE mind.

The trouble is the question of where do they fit, exactly? In the world they were born into, pop was a tired by numbers force on its last legs and their mixture of a tune with some indie sensibilities was rather refreshing, but in the intervening years pop and indie have not only upped the game but built on many of the things that made Garbage the success they were. It is more unusual now to not see women who are afraid to be dynamic, outspoken and a bit edgy fronting an act. In fact, these days it's more edgy to not be edgy. Therefore Manson's vocals could happily sit on a modern Katy Perry or Pink record, such is the relatively faux-angst content of the lyrics: "I won't be your dirty little secret"; "I confess I've lost control / I let my guard down, I let the truth out"; "Before you kissed me and stole all my hope". More tellingly, Manson also sings on 'Sugar', "Won't someone love me?" and you fear that in 2012, by straddling the two genres once more, very few will even care.