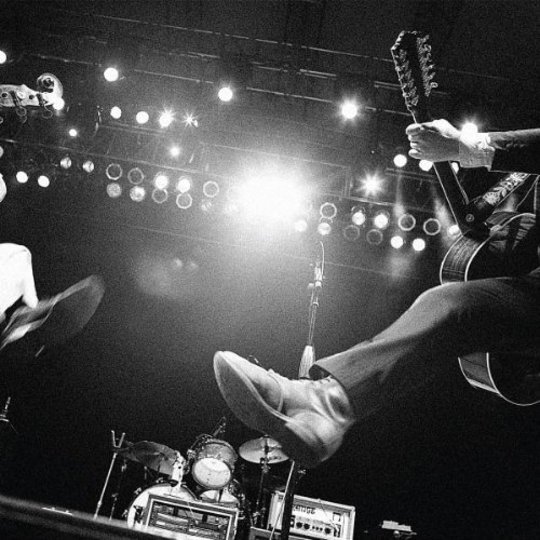 While it’s probably true to surmise that the critical reaction afforded to The Decemberists' last two studio records has generally been pitched below that of their earlier work (highly unfairly in my opinion, I’d place the glorious, rollercoaster insanity that was 2009’s The Hazards of Love comfortably in my best albums of the past five years list), there has always been a feeling that The Decemberists are a band that are best appreciated live.

In a way that can’t quite be replicated through simple speakers, Colin Meloy’s swarthy, charmed and oft-grisly tales spring to life on the stage: a space where the band can fully indulge their theatrical penchant and love of gleeful excess. And while We All Raise Our Voices to the Air – Live Songs can’t quite replicate the pantomime interaction of the live shows (great as ‘The Mariners Revenge Song’ is on here, you really need to see Meloy throwing his arms wide and screaming as the whale devours him to really 'get it' – accompanying DVD maybe?), it’s actually a remarkably feisty live record which manages to capture the carnival of their live show with admirable aplomb

As a first achievement, the album it manages to inject a degree of zest into the songs from The King is Dead, jolting them from the somnolence which occasionally bogged their studio equivalents down. ‘Calamity Song’ sounds alive and inspired.‘Down By the Water’ positively crackles and buzzes as it zips along, while ‘Rox in the Box’ sounds somewhat beefier, angrier and more confrontational. There is still issue to be taken with with the poor ‘All Arise!’ which – though far better than the album version – is still painfully 'corny hoedown' and difficult to endure; something that The Decemberists are far better than. But this is arguably the only foot put wrong in an otherwise stellar live collection.

Considering what a fine record it is, and how brilliantly it was executed live when they played the full album in London back in 2009, it’s a slight shame to only see one of the tracks from The Hazards of Love showcased here (the stomping, drum-heavy ‘The Rake’s Song’). But this also pays testament to the rich variety and quality of tracks residing in in their haversack. There is a pleasingly heavy emphasis on the band’s Kill Rock Stars trilogy, with an elegant ‘Grace Cathedral Hill’, a sweeping ‘Leslie Ann Levine’ and the barnstorming opener of ‘The Infanta’ being particularly memorable. But most stunning of all are the 16 sublime minutes when they play all three parts of ‘The Crane Wife’ together as one, piecing it into a modern fairy-tale of staggering vision and gilded wonder. Say what you like about the excesses of The Decemberists, but when they come out with a track as utterly glorious as this, it seems to churlish to throw words like 'pretentious' and 'self-indulgent' around. This is quite breathtaking – curiously both behind, and ahead of its own time.

Throughout it all, there are nicely captured segments of crowd banter, including Meloy’s opening “This is not the Keith Urban concert. If you mean to be at a Keith Urban concert, you will be sorely disappointed”. There is a section at the end of ‘Billy Liar’ where he does the old ‘divide the crown in half’ routine and far from being cringe-worthy, you’re actually wishing yourself there, especially when the whole thing threatens to fall apart with barely-supressed laughter. He then replies to a crowd request to “stand up and dance” with a monologue about producing “a footloose moment…it makes us feel good…we’ve freed the town from the shackles of conservatism”, before lustily introducing the next song (‘We Both Go Down Together’) as being about “a double suicide” - incorporating a call and response refrain between him and the audience. Oh, and there’s a yodelling skit in there as well. Only in the world of The Decemberists…

What defines The Decemberists; what makes them stand out from the pack, is that fundamentally, they are an alternative rock band who as the stirring closing track professes, were “meant for the stage”. They are theatre as much as they are music: embracing vaudeville and folk in the old-style knife a-slashing, maids a-weeping, plots a-stirring, love conquers all sense. As they reach ten years of album releases, We All Raise Our Voices to the Air serves as a more satisfying tribute than a ‘Best Of’ as it permits you the opportunity to hear the band in their niche environment: complete with all the joyous theatricality they embody. If you don’t like The Decemberists, two hours of such hyperbole and puppet-show drama probably won’t convince you otherwise. In all honesty, it’ll probably irritate the hell out of you. But if you do get their warped, twisted, storytelling magic, and especially if you’ve never had the pleasure of seeing them live, this is a documentation of a superb live band: one of the few today who can pull off such tricks and traps with effortless ease. “And when we die / We will die / With our arms unbound /This is why we fight” sings Meloy towards the end of the concert. That unwillingness to be constrained by boundaries and limitations is ultimately what makes The Decemberists such a unique band in this day and age. God bless their dark, mischievous, sordid and beautiful little hearts.