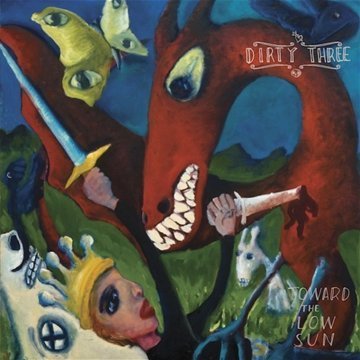 Dirty Three - Toward the Low Sun

Capturing three musicians of virtuosic ability at the (continued) height of their powers, Toward The Low Sun arrives as a return to form which the Dirty Three never actually lost - only a ‘return’ in the sense that we’ve had to wait seven long years since we last heard from them on record.»

legendary instrumental trio dirty three boldly break cover with a remarkable new album, 'toward the low sun', on bella union records. 'toward the low sun' is the product of the most ceaselessly creative period in the band's career, in which jim white, mick turner and warren ellis have relentlessly made music in different permutations and locations around the globe. no other australian band has ever impacted on international music in such a subversive fashion. this is a band that exists within itself and outside of itself, generating a massive (and massively influential) body of work. 'toward the low sun' is not a cosy, nice-to-be-back, return to the comfort zone. there is an energy and a raw excitement evident from the first electrifying opening moments through to the album's finale. in warren's words, "dirty three has always been about the way we play together and feed off each other. we wanted this one to be a return to the more improvised and instinctive approach of the earlier recordings". and indeed, for all their incredible music of the past, the dirty three have never seemed more relevant. 'toward the low sun' was produced by casey rice and dirty three and was recorded in melbourne at head gap studios and mixed at sing sing.
description from www.roughtrade.com