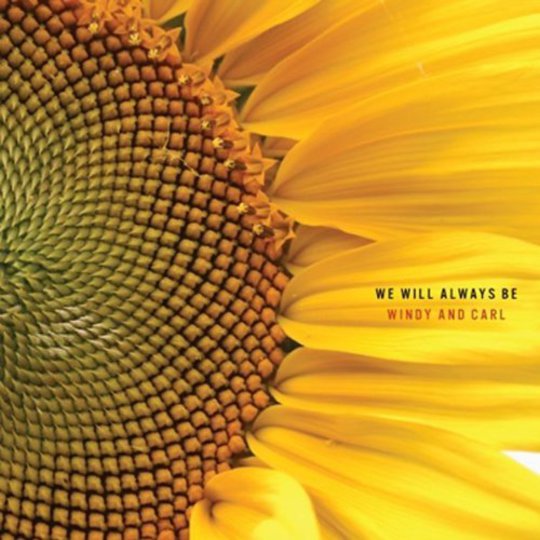 Of the immeasurable legions that blogged and tweeted and pretend-hand-wrung about Kim Gordon and Thurston Moore of Sonic Youth filing for divorce a few months back, only a small fraction of them will encounter the new album by Windy and Carl. This is a shame, because if people do in fact have a genuine need for experimental guitar music performed by a happily married and now middle-aged couple, then Windy Weber and Carl Hultgren fit the bill, and have done for some time. It’s also a shame because they create exceptionally pretty, plangent ambience which, despite not tending to be song-based (as ‘song’ is normally understood), is sweet and enveloping enough to feel oddly accessible.

This is not to say Windy and Carl want for acceptance. Having released music since 1993, We Will Always Be is the Michigan duo’s eighth album (perhaps more, depending on how one distinguishes between albums and EPs), and it will no doubt encounter a loyal core audience who’ve been eating up their earth-orbiting drones and home-baked self-sufficiency since before acts like Emeralds had switched on an amp. W&C albums are always similar enough to evoke pleasing familiarity, yet always sufficiently different to avoid an impasse; alterations to their style here are minimal, on the surface at least, but the results are emotional and resonant.

According to Weber, writing on the W&C website, this album began life as a solo record by Hultgren, presented as a Valentine’s gift to his wife and not intended for release. They subsequently decided that it warranted an audience; compositionally, We Will Always Be remains Carl’s album, but Windy provides vocals on four of the eight tracks. The opener, ‘For Rosa’, is the most incongruous: a three-minute acoustic strum on which Weber, whose voice is normally rendered inscrutable by effects and mixing, sings a little like Mimi Parker of Low. Pleasant but unedifying, it will make long-term W&C enthusiasts fear a change for the worse. It’s followed, however, by ‘Remember’ and ‘Spires’, both entirely typical of the duo’s oeuvre – glassy delay-pedal ambience, metronomic keyboard pulses that’d be equally at home on an Eighties crystal healing new age LP (or something by Popul Vuh), the eventual descent into a vaguely uneasy feedbacking rumble.

Songs are pointedly run into one another, so you have to look at the CD player’s display to confirm where they end and begin, although the idea is probably that you don’t. ‘The Frost In Winter’ (vying with ‘The Smell Of Old Books’ for the honour of most self-parodic songtitle) subtly slips into ‘Looking Glass’; this eventually distinguishes itself by being the album’s most minimal occasion, seemingly just a couple of layers of scarcely shifting drone and akin to a vocal-free and enormously strung-out Cocteau Twins. As I say, you can hear something like this in pretty much any given period of Windy And Carl’s recording career, but it would be an odd fan indeed who expected or wanted them to tamper with their self-fashioned formula.

Given its 19-minute length, and the superlative way Weber talks about it on her blog, you imagine that W&C see closing song ‘Fainting In The Presence Of The Lord’ as We Will Always Be’s pièce de résistance. It is complex by their standards, progressing from ethereality to dissonance and back again, but for me – long-time listener, first-time... reviewer – the pair’s manoeuvres converge most pleasingly on ‘Nature Of Memory’. It’s bassier and darker in tone than most of the album’s remainder, a shade more conventionally ‘space-rock’ than normal while also recalling the sinister beauty of Flying Saucer Attack and similar Nineties Bristolian projects. Weber’s vocals are hushed, almost conspiratorial whispers, and it’s ideal for either helping you drift off to sleep or merely soundtracking a several-hour period in one room with no particular plans to emerge.

Which also applies to almost everything else on this album, to one degree or another. This might not be something you particularly want or need from music, and equally it might be a stretch to deem We Will Always Be ‘essential’ in any kind of broad sense. However, if you take an interest in ambient music, drone rock or related quasi-genres, it behoves you to own some of Windy and Carl’s catalogue; this is as useful and high quality a starting point as just about anything they’ve recorded.