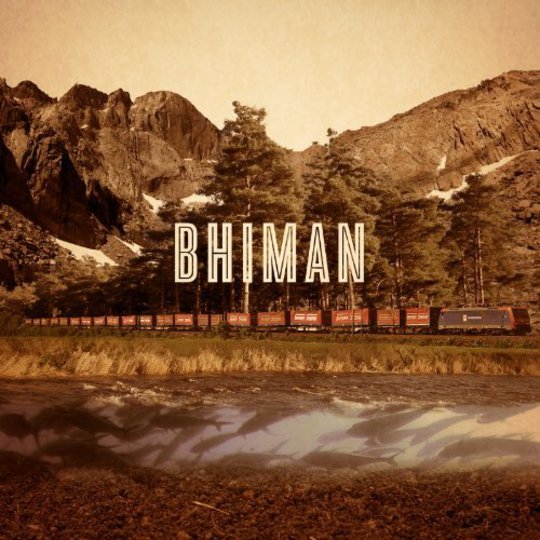 An aspiring blues singer of Sri Lankan parentage who spent his school years studying Nirvana, Bhi Bhiman doesn’t exactly scream recipe for success. Reading his bio is like watching a mash-up of bizarre X Factor back-stories. However - almost irritatingly - his music’s charming, and arrives packing an extraordinary tenor voice, rich acoustic guitars and at least eight conflicting personalities to wrestle with in his lyrics. There’s a Flight of the Conchords-style mischief to Bhiman’s writing: a mix of folk oddities, social outrages and sticky black humour that’d make even Perfume Genius wince. You only have to watch the ’Guttersnipe’ video (currently at the top of the iTunes chart) to get the 'Sri Lankan Woodie Guthrie' tag he’s been handed, and amazingly, the remaining tracks on Bhiman are just as strong, fuelling a 45-minute barn dance that exchanges moonshine for injustice and soul-searching. And flamenco.

Bhiman’s key ingredient is its cutting humour: despite some flaccid arrangements this is folk music gassed with nitrous oxide, its author so sharp he has to disguise himself by singing like a surprised Shirley Bassey. ‘Kimchee Line’, surely the world’s first cotton sack song about stealing produce from a dictator’s allotment, finds Bhiman howling about the vitamin E in scrumped peppers and plucking his guitar like Jimmie Rodgers. Allegedly written in response to Kim Jong-un’s farming plan, it’s something Bhiman’s fellow residents of St. Louis would never expect to see: a country song that acknowledges scurvy. The aforementioned ‘Guttersnipe’ is even sharper, with the singer assuming the role of a gifted hobo returning to his hometown by rail. ”I can’t get my money right / Can’t put my two cents in,” he whines, bolstered by a lolloping bass line and folk-pop arrangements like Lemon Jelly in dungarees.

It’s not all cornfields and train journeys, however, and Bhiman is careful to dump the humour when it needs to prune back on the kookiness. ‘Take What I’m Given’ is a beautifully sad song about retirement, full of weary piano and anxieties delivered in a pitch that could out-strain Louis Armstrong (”There’s too many eagles and fast moving cars / Thinking that their lives are worth more than ours”). ‘Eye On You’ extends the seriousness to the production itself, ditching the country feel for the morose vibe of an unplugged rock band. Bhiman’s love of Cobain comes through here, sneering as he drops the line ”What you talkin’ about business trips / You work at the mall”. There’s still time to work in some cocktail chimes just as the relationship implodes, and if it’s selected as the second single, expect it to go mainstream. Far weaker songwriters have gone platinum on less.

In the end, Bhiman’s balancing of acid lyrics and ol’ tunes lift it from the current crop of folk albums it’s competing with. Even if you hate both blues music and progressive thinking, you’ll struggle to detest this whole album - any record capable of explaining the global financial meltdown using a guitar, hunting horn, and Paul Sorvino’s cooking tips from Goodfellas deserves the badge 'unique'. Bhi Bhiman is certainly that. He might not be able to ignite any parties but to anyone who’s ever left home on a shoestring, or dreams of finding that heartbreak song made of steel drums, mandolins and nothing else, he’s a veritable treasure chest. Broken cuckolds, gumshoe hymns and deranged outlaws all come together, each sounding sunny as a fruit commercial but spiked with underdog bile (”I send my kids to school down at the Wal Mart / It’s kind of like a private school / Baby says her favourite class is recess / Lucy-Jean just pees the kiddy pool”). Imagine Counting Crows if Adam Duritz had to lay brick instead of buying dreadlocks. This is the stuff track workers would be listening to if only they hadn’t mechanised the rail industry.