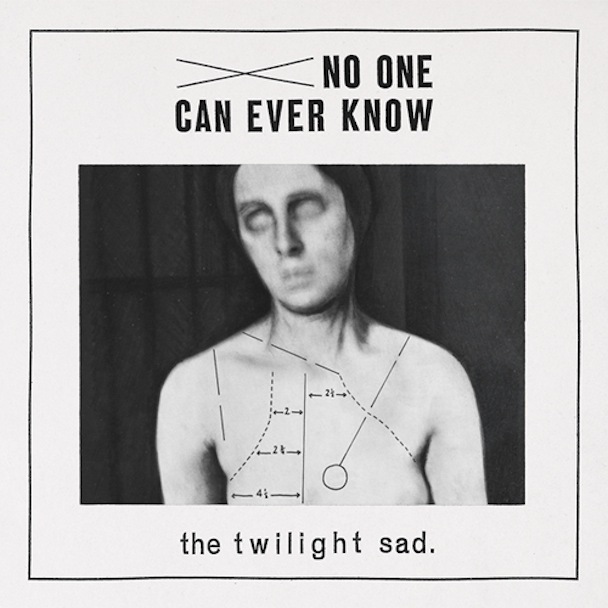 The Twilight Sad - No One Can Ever Know

Purer than innocence and richer than gold, No One Can Ever Know confirms that The Twilight Sad are simply too good to remain a-little-less-than-well-known outside the restrictive realms of slightly-less-than-world-conqering ’zines.»

The Twilight Sad announce details of their new long-player ‘No One Can Ever Know’, the follow-up to 2009’s acclaimed break-through ‘ForgetThe Night Ahead’. ‘No One Can Ever Know’ is released across all formats on 6th February 2012, full tracklist as follows: ‘Alphabet’/ ‘Dead City’/ ‘Sick’/ ‘Don’t Move’/ ‘Nil’/ ‘Don’t Look At Me’/ ‘Not Sleeping’/ ‘Another Bed’/ ‘Kill It In The Morning’. Already flagged by the widely leaked ‘Kill It In The Morning’ and forthcoming first single proper, ‘Sick’ (November 14th), ‘No One Can EverKnow’ marks a sonic shift for The Twilight Sad. Freshly inspired by a listening diet of Caberet Voltaire, Liars, Magazine, Autechre, Banshees, Fad Gadget, PiL and Can, a synth-heavy sound characterizes ‘No One Can Ever Know’, a record thematically akin to the Manics ‘Holy Bible’, Depeche Mode’s ‘Violator’ and Nine Inch Nails’ ‘The Downward Spiral’. For a listen to some of the inspirations behind the new album check guitarist Andy Macfarlane’s podcast here.