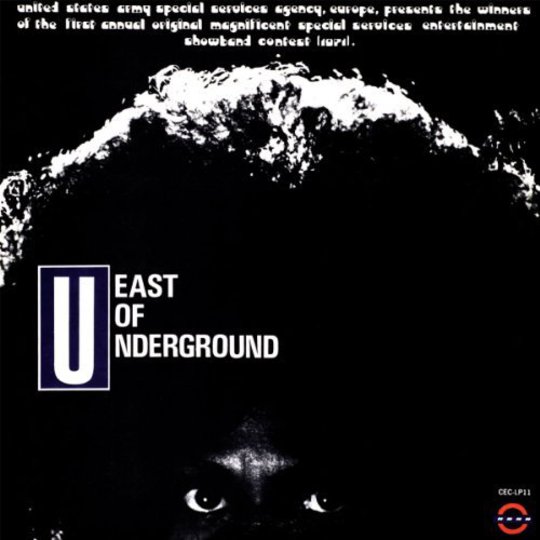 Anyone who has chanced upon the proto-punk sounds of The Monks has most likely boned up on their back-story and consigned it to the pile of one-off tales littered throughout rock history. For those that don’t know: the Monks were a band of American GIs stationed in Germany in the mid Sixties, whose cut glass guitar sound and charismatic vocal stylings had more in common with music made more than a decade later. Now, if proof were ever needed that there’s still a trove of unheard music out there deserving of a wider audience, a glut of recordings from other U.S. military personnel have been unearthed. This box set from the reliably eclectic Now-Again gathers the work of four bands, all made up of military personnel working in outposts on the former West Germany at the end of the Vietnam War in the early Seventies.

East of Underground: Hell Below is a three-disc set, complete with an extensive booklet and an air of mystery that only adds to the appeal. So little is known about the participants in these recordings that Now-Again label boss Eothen 'Egon' Alapatt is encouraging anyone who might have information about them to email him (egon@nowagainrecords.com). To add to the intrigue, sleeve note writer David Hollander admits that the band East of Underground, whose sole LP was reissued in 2007 and is included here, remains a mystery to him. There are no records of how many copies were made, nor many clues as to what the people involved with it are doing now. The Army, it seems, were not good record takers when it came to documenting their musical pursuits.

One member of East of Underground — guitarist Lewis Hitt — has surfaced since that 2007 reissue, and he chips in with a few useful observations in the liner notes. The double whammy of living in politically charged times, and the ease of avoiding active duty by becoming an Army musician, lend these recordings a warmth and vitality that may raise an eyebrow or two. This is no Black Monk Time, but it is a fascinating document of an Army sub-culture where lyrical dissent was briefly allowed to space to breathe before its participants were shipped off to battle or to the sanctuary of home. East of Underground even tackle Curtis Mayfield’s musical screed on race relations, ‘(Don't Worry) If There's a Hell Below, We're All Going to Go,’ flooding it with an urgency that resonates far beyond the base 'entertainment' purposes the Army intended for these projects.

But while there are hints of genuine countercultural upheaval here, that aspect of Hell Below shouldn’t be overstated. There’s a righteous fury boiling up on some of East of Underground’s covers — their buttery version of Sly & the Family Stone’s ‘I Want to Take You Higher’ has a depth to it that positively burns. But we also get dips into schmaltzy entertainment, some of which sags a little. The (mostly) female-fronted SOAP deliver versions of ‘Ticket to Ride’ and ‘Gypsies, Tramps and Thieves’ that few people in possession of this set are likely to return to again. But even SOAP have their merits; their version of Carole King’s ‘You’ve Got a Friend’ feels impossibly sad when you bear in mind the circumstances in which the lyrics are being delivered, a million miles away from home, living closer to death than most of us will ever experience.

Elsewhere, The Black Seeds and The Sound Trek deliver versions of the O’Jays’ ‘Back Stabbers,’ both of which make up for in passion what they lose in musical chops. In fact, there’s a noticeable drop-off in musicianship outside the East of Underground songs, although it scarcely matters. It’s about the embodiment of a feeling in the vocal performances, a channeling of frustration and anger that beats out the sloppy playing. No master tapes of these recordings remain; instead, it’s all been pieced together from old vinyl albums, often complete with scratchy audience noise and dips into lo-fi. But it’s all worth it when the Black Seeds are wading knee deep in their distressing take on ‘Ain’t No Sunshine,’ or East of Underground are laying down a taut undertow on their interpretation of the Temptations’ ‘Smiling Faces Sometimes’. This is a luxury purchase — it’s far from essential to anyone outside of hardy collectors - but the material is often imbued with a vitality that is both compulsive and enduring.