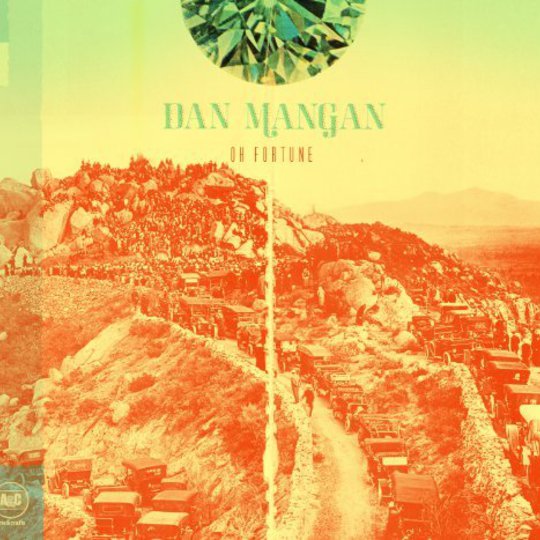 There’s a Christmas market that sets up shop here in Birmingham every winter. It’s a sprawling web of stalls and vendors that throws a splash of colour and exuberance on an often-dreary extended advent period. I walked through its network of pop-up stalls, past a disparate array of traders trying to offload their goods on my way home last week. As I did so, I listened to Dan Mangan’s Oh Fortune. Immediately, I noticed how the tone of the record mirrored the effect of the market: it is (at least musically, if not lyrically) a vivid bubble of warmth to counteract the numbing winter climate and the looming gray.

If you’re familiar with Oh Fortune’s predecessor – Polaris-nominated indie-folk (read: twee?) triumph Nice, Nice, Very Nice – the orchestral drone that announces this new record may well throw you off balance. Immediately, within the first 20 seconds, it’s clear that Mangan is working from a fresh palette, no longer constricted to the familiar construct of acoustic guitars and mandolins and drummers that seem scared to break a nail and et ceteras. The song (‘About As Helpful As You Can Be Without Being Any Help At All’) dissolves to reveal a waltzing string section, and with the expansive orchestral texture slowly coming to the boil, Mangan paints a sanguine tale of confrontation and rebirth – and while his use of metaphor can be a little oblique (“I lit up like a match/’cause I bled gasoline/made a torch of myself ‘till the moon was mine/stars made of me/oh I lit up that sky”), there’s something completely charming about it. Before long, it’s exploded into glorious Technicolor, all stomping joy and unadulterated grins.

Previously web-leaked track ‘Post-War Blues’ tows a similar sentiment, its altogether more danceable rhythms and jubilant chorus guitar riffs exhibited in contrast to gestural drum interjections and occasional swirls of feedback. The hurtling forward-momentum of the thing crashes right into the song’s all-too-brief coda, in which a brass section really thumps the final nail into a sign that reads ‘anthem’. This confidence is threaded right through the record; at times ‘Rows of Houses’ sounds like a distorted, pixelated country song, and title track ‘Oh Fortune’ revisits those interrupting percussion spatters, and although never reaching the same soaring heights as ‘Post-War Blues’, there’s a restless vitality to it – always threatening to explode, but with no such release ever materialising.

The music isn’t the only thing that’s gotten bolder and grander. The conceptual ideas behind the songs seem instantly more universal - but that’s not to say that Mangan’s necessarily got the answers to the burning pertinence of his newfound questions. Closing track ‘Jeopardy’ – a gently plodding and comfortably paced song - is entirely comprised of questions (“what’s worth burning?/what’s flammable?/what happens when all flags burn together?/is that unity?”). And while a lot of the music sparkles with hope and optimism, it’s more often characterised lyrically by a sincere and crumbling desperation – ‘Jeopardy’ asks several times “what is this sorrow?” and if ‘If I Am Dead’s request to “burn my remains, my stuff the same” isn’t enough, you don’t have to wait too long before ‘Regarding Death and Dying’ is reflectively asking “where do they go?”

While Oh Fortune’s energetic standouts might be a drain on attentions, it’d be a shame to gloss over the record’s quieter moments, of which there is no shortage. ‘If I Am Dead’ is the most forlorn song of the set, a reflective ballad whose bed of orchestral accompaniment occasionally retreats to leave a lonely whistle; ‘Daffodil’ is reminiscent of Feist’s ‘The Park’, sounding as if Mangan is singing simultaneously through static and rain, as scatters of radar-blips sound off in the background, and ‘Leaves, Trees, Forest’ – while more assertive – still hides beneath it’s shuffling drums and layered atmospherics, a world away from the electricity of the more immediate of the album’s 11 tracks.

Oh Fortune is full of unashamed, orchestrally embellished pop-rock-folk hybrids, instantly accessible and almost as speedily rewarding. It’s the sort of record that’s should catapult Mangan (and rightly so) on to bigger things, the sort of record that should have his audience-base expanding like a close-knit community of rabbits. Whether it will or not remains to be seen – for those of us who have discovered it though, this winter release is a vibrant Pollok splash in the midst of a seasonal lull.