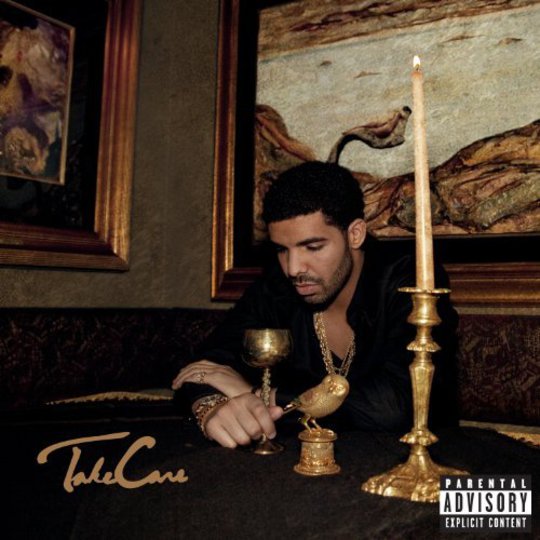 On paper, Drake does not look like the recipe for a successful rapper. He’s half-Jewish, a former child actor. His upbringing, especially compared to most rap artists, was not tough. And he’s Canadian. Despite what would be seen by most as shortcomings, in a brief three years Drake has managed to carve out his own niche. Not only is he huge, there are now copyists following in his wake, adopting his gentle beats and nice guy flow. Take Care builds upon everything that’s come before, goes further and deeper, giving more insight into the world of Aubrey Drake Graham.

A quick glance at the cover of Take Care will tell that you that there are two things going on in Drake’s life: being very rich, and being very sad. When he’s not talking about how much money he has (“six figures when they tax me”), he’s telling you all his problems. Drake has a lot of problems, and most of them revolve around girls or being rich and famous. He rarely strays from this subject, yet despite the subject matter not changing much through the album, there remains a surprising amount of depth and emotion. Much like Kanye West’s last couple of albums, Take Care is as much therapy as it is rap. In fact, it’s as much R&B balladry as it is rap, with Drake singing his heart out at every opportunity. In ‘Marvin’s Room’, over little more than a watery kick drum, Drake drunk dials an old girlfriend who’s “happy with a new guy” and explains all the ways he’s “having a hard time adjusting to fame”. It serves as a centrepiece to the whole album – he wants to go back to his old life, to how everything was before but he knows that he can’t. It’s Drake at his most open, managing to make being rich and successful sound incredibly lonely. Elsewhere he trades vocals with his real life ex-girlfriend, Rihanna, adding extra weight to yet another tale of heartbreak: “We know you hate being alone/You ain’t the only one”. To have a rapper express that amount of emotion is rare, but as we know Drake is not your average rapper. Not many hip hop artists would rework ‘Back That Azz Up’ into an rnb ballad, as Drake does on ‘Practice’, telling a girl how “all those other men, they were practice, for me”.

As on Thank Me Later, the majority of the production for Take Care is handled by Noah ‘40’ Shebib. He sets the mood for the entire record, with laidback, subdued drums and gentle synth work, building an entire world of ambient sounds which serve as a crutch for Drake’s crooning and soul bearing. Even when the production is handed over to someone else it doesn’t affect the mood or feel of the record. Jamie XX re-works his remix of Gil Scott-Heron’s ‘I’ll Take Care Of U” for the title track, turning it into a post-dubstep number, all four to the floor beats and haunting piano loops. The best guest spots are those behind the desk as most of the itinerant rappers on Take Care end up disappointing. Nicki Minaj’s verse on ‘I’m So Proud’ does little to save the song from being average. Andre 3000 fails to live up to expectations, Lil Wayne sounds lazy and the less said about Birdman the better.

If, like Ghostface Killah, you think of Drake as the

The main problem with Take Care is not that Drizzy is constantly complaining but that it goes on for so long. With 17 tracks clocking in at one hour and twenty minutes, and an average song length of just less than five minutes, as an album it’s almost impossible to digest in one sitting, especially when you get into the last third. Like so many rap albums Take Care would greatly benefit from a cull of four or five songs. Take Care is dense and takes a while to digest, but once you’re in Drake’s world there’s no escaping.