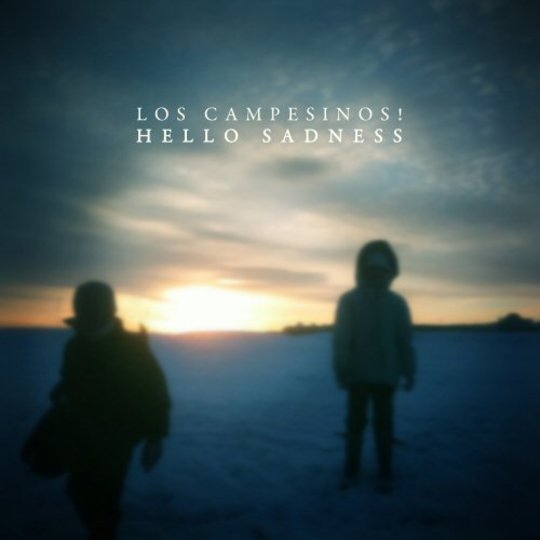 If all the partners of past relationships in Los Campesinos! songs to date – every unrequited could-have-been, short-lived fling, and affair ending in separation or even demise – could somehow fill a room in some nightmarish purgatory, then it’d probably have to be a conference hall by now, at the least. Abortive relationships are a subject matter the band has always excelled at, as early on as Hold On Now, Youngster…. So an album entitled Hello Sadness, dedicated to 'love, loss, heartbreak… and World Cup exits', is not so much the embittered and disillusioned end to a once naïvely optimistic bunch of graduates, but more an acknowledgement, and refinement, of their strengths.

With that in mind it’s not necessarily a surprise that a few of the songs on Hello Sadness might have fit on Romance Is Boring or even We Are Beautiful, We Are Doomed. That said, ‘By Your Hand’ might be the best LC single to date, besting any of its predecessors’ hooks, even if it’s not the first time Gareth has taken to his hopelessly obsessed persona (Rob/Sparky’s spoken word bit, I might add, is a nice turn). So it’s a refreshing change to also hear Gareth as seducer for once instead of self-deprecating loser, offering to share his tips for snaring your girlfriend on ‘Songs About Your Girlfriend’. Along with ‘Baby I Got the Death Rattle’, this clutch of songs are on the lighter side, in typical wry LC manner. Much of the other half of the record is more despondent in nature: ‘Hello Sadness’ is a post-breakup lament, building into a multi-instrumental consuming racket of anguish; ‘To Tundra’ is a more elegiac, strings-backed piece, ending with a plea to “take a body to tundra, just take me with you as well”.

Gareth’s lyrics have always been rather contentious, staunchly defended as poetic by some and scoffed as Live Journal-esque mutterings by others. Still you’d have to concede that he has something of a talent for elaborate lyricism, even if it does occasionally irk a few people. ‘Life Is A Long Time’ is perhaps one of his finest, demonstrating his speciality for finding the minutiae of subjects, by retelling a difficult relationship through the anatomy of his and a lover’s eyes. But the greatest accomplishment here is ‘Every Defeat is a Divorce’, which I might venture to suggest, is perhaps one of the best World Cup anthems that will never be. All the clumsy football analogies of yore have at last yielded a song that serves as both an apt Brazil 2014 anthem contender whilst also being an unhindered heartbreak song. Even with that successful marriage there is still the odd line throughout the album that sits a bit awkwardly - ‘Baby I Got the Death Rattle’ being the biggest potential offender - although the frequency of said lines depends on your taste. And while it’s nice to hear more of Kim on ‘The Black Bird, The Dark Slope’ it’s unusually blunt amongst the lyrical deftness of the rest of Hello Sadness.

But enough about Gareth, the rest of the band, as anyone who has followed LC’s blog will know, has experienced quite a few changes. Most recently violinist Harriet has parted ways (although present on this album) her strings gave LC songs a grandeur that’ll be missed. Absent from this record is vocalist Aleks, and along with her any call-response vocals with Gareth, replaced by more group choruses. Not to mentione there are fewer contributors outside the Campesinos! family circle this time round. This might partially explain why Hello Sadness is a less varied record instrumentally, but it also bereft of the experiments with noise and ambience on Romance Is Boring. Although some were less successful than others, attempts like ‘Heart Swells’ or ‘Coda…’ did have a certain charm. Perhaps less sonic meddling is a sign of a band more assured of their footing. It’s not a big deal, granted, but it’s a pity to hear less of a range than before.

Hello Sadness is obviously more melancholic than anything LC have done so far, but thankfully far from being melodramatic. To end in a football analogy, now an LC staple: it’s a solid performance, by far their most coherent yet, but missing some of the flair of previous bouts.