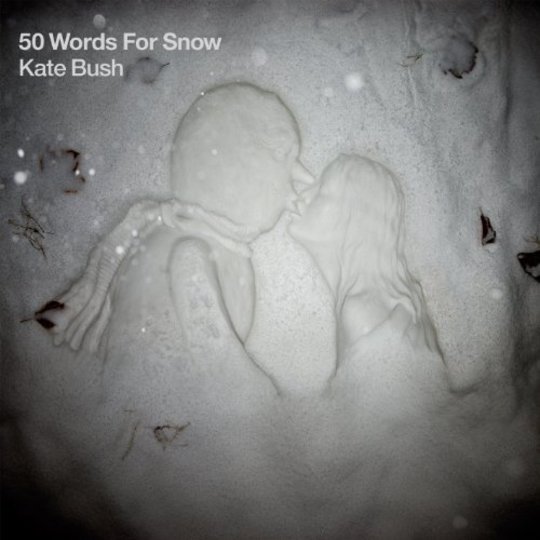 So yeah: maybe when Kate Bush said the 12 year gap between The Red Shoes and Aerial was down to her wanting to work on being a mum for a while – and not because she’d had a mental breakdown/become morbidly obese/was a dope fiend/sundy other conspiracy theories that flew around – she was, y’know, telling the truth. Here, six years after Aerial and just six months after Director’s Cut comes 50 Words for Snow. It’s Bush’s third album since 2005, which technically puts her up on The Strokes, The Shins or Modest Mouse.

And jolly spectacular it is too, which is never a guarantee: Aerial was a masterpiece; The Red Shoes, The Sensual World and the diversionary Director’s Cut were not. Bush has always been best at her most focussed, and here she delves monomaniacally into snow and the winter – its mythology, its romance, its darkness, its rhythmic frenzy and glacial creep. 50 Words for Snow is artic and hoare frost and robin red breast, sleepy snowscapes and death on the mountain, drifts in the Home Counties and gales through Alaska.

But it is mostly, I think, a record about how the fleeting elusiveness of snow mirrors that of love; and if I’m off the mark there, then certainly as a work of music one can view it as a sort of frozen negative to Aerial’s A Sky of Honey, the transcendent 42 minute suite about a summer’s day that took up the album’s second half. Whatever the case, 50 Words...demands to be listened to as a whole: the days of Bush as a singles-orientated artist are long gone on a long, sometimes difficult record on which the shortest track clocks in at a shade under seven minutes.

The first three songs clock in at over half an hour and comprise the starkest, most difficult and in some ways most beautiful passage of music in Bush’s career. Based on minimal, faltering piano and great yawning chasms of silence, these tracks mirror the eerie calm of soft, implacable snowfall and winter's dark. On the opening ‘Snowflake’ she shares vocal duties with her young son Albert, whose pure falsetto blends into her lower register. Vaguely suggestive of carol singing, his tones are also clear and elemental, without the shackles of adult emotion as he keens “I am ice and dust and light. I am sky and here.” over his mother’s spare, hard keys. ‘Lake Tahoe’ is the real challenge here: a crawling ghost story about a drowned woman, gilded with cold choral washes, its diamond keys crystallize into being a note at a time. Its 11 minutes are roughly as far away from ‘Babooshka’ as it’s possible to get. Yet as Steve Gadd’s soft, jazzy drums gather in pace and intricacy, life and movement enters this crepsular musical tundra, the album’s low key opening sequence swelling to a soft crescendo with final part ‘Misty’. A bleakly sensual love story that, er, appears to be about a doomed affair with a snowman, it’s somewhat reminiscent of Spirit of Eden-era Talk Talk as its 13-minute expanse periodically blooms into gorgeously tangled blossoms of bucolic guitar.

Single ‘Wild Man’ sees a shift in gear – springy, exotic electronics, a sprightlier pace and a sense of playfulness as a husky-voiced Bush trades the last song’s impossible man for another as she dreams about the possibility of a yeti. Describing a Kate Bush track without making it sound silly can be rather trying – this is a woman whose past triumphs include several songs featuring Rolf Harris – but I guess ‘Wild Man’ works as lush, sensual dream of the possibility of the things that might existing outside humdrum human experience. It’s not just about the yeti, but the impossibly exotic place names she mutters in her verbal quest for the creature – “Kangchenjunga… Metoh-Kangmi… Lhakpa-La… Dipu Marak… Darjeeling… Tengboche… Qinghai… Himachal Pradesh” – and the vertiginously thrilling change of gear as heavily distorted guest Andy Fairweather Low roars a near indecipherable chorus. It’s also about Bush’s formidable production skills, her precise, nagging synths and total mastery of studio as instrument.

Those synths imbue ‘Snowed in at Wheeler Street’ with a sense of frazzled foreboding that negates the potential cheesiness of Elton John’s throaty turn on a duet that casts him and Bush as a pair of lovers spread across time, doomed to separate at key points in history, wishing that could return to one mundane, snow bound day spent together. And a bed of electronics whip up a quietly hypnotic tumult on the astonishing title song. Here – and again Kate Bush songs can be a job to not make sound ridiculous – Bush counts to 50 in a hushed monotone as Stephen Fry (oh yes) recites a list of names for snow, real and imagined: “blackbird braille… stella tundra… vanilla swarm… avalanche”, occasionally punctured by an eerily muted chorus in which Bush frenzied urges him to continue the list. On the one hand, it continues ‘Wild Man’s revelry in the intoxicating power of human language. On the other, it’s the album’s least human track, its churning, chiming electronics and alien words mirroring the quiet chaos and leaden intensity of a snowstorm, its final minutes a headlong descent into oblivion and whiteout. It is astonishing, immense, bizarre and perfectly realized: only Kate Bush could conceive of this song, and nobody else will make anything like it again.

As the cooing over Director’s Cut demonstrated, even Bush on diversionary form is enough to tease gushy spurts of adjectives from the soberest of souls; hitting a true peak again, there is the temptation to drone on about how important she is, how she dwarfs most of her peers artistically, let alone the braying yahs and rahs of today who cite her as an influence. But let’s keep it in perspective: in the 26 years since Hounds of Love, Aerial and 50 Words for Snow have been her only truly fully realised albums. Kate Bush is more than fallible; but at peak she is incomparable.