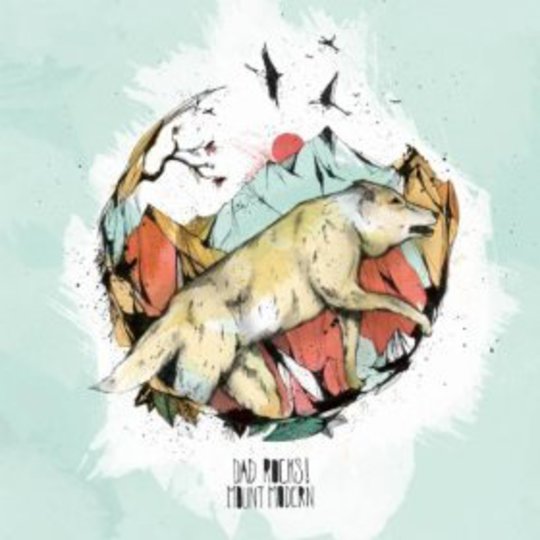 In a recent band portrait, Snævar Njáll Albertsson stands bearing a flying V guitar, his head thrown back in a familiar pose of studied rock 'n' roll rapture. But he isn't set against the flashing lights and dry ice of a festival stage - it looks more like he might be kneeling in a bedroom, and there are toys scattered everywhere. The metaphor in the picture is obvious and effective - Albertsson is indeed a father of two as well as being a fast-rising underground star - and it sets the tone for the smart, playfully self-aware nature of his debut album, Mount Modern.

Albertsson's nom-du-plume is Dad Rocks!, a statement you can imagine coming from the lips of his young son. This childlike view is something that runs through the record. Albertsson contrasts different perspectives on the world in his songs - both the sense of naïveté and wonder that children feel so strongly, but also the worry of that their parents feel - how to best raise a child in the face of a continuous flow of conflicting information, in a confusing world that can be tough, unfriendly and full of potential probelms and pitfalls.

These aren't sentiments regularly explored in the indie realm, and certainly not with this kind of openness and sensitivity. In marrying the details of his domestic and personal life with indie-pop-inflected songs, Albertsson has done something that feels like an artistic triumph - something genuinely exciting and new.

'Funemployment' is a heart-warming tale about taking the rough with the smooth and turning bad situations into good ones through sheer force of will. If you could medicalise Albertsson's outlook into a pill, Prozac would be put out of business.

'The Ballad Of The Fox Father' is the album's centrepiece, the longest and perhaps catchiest track here. It unfolds beautifully over five and a half minutes on tinkling piano, guitar, bass, brass, and latterly some well-judged looping effects. The lyrics recall the laconic, evocative free-association poetry of Mark Linkous - there's a allegorical message hidden in this warm, gentle tune, all tangled up in rhyming riddles. Trying to untangle the meaning is a fun game of wordplay cat's cradle that you'll love, if that's your kind of thing.

It's an achievement in itself that songs like 'Pro-Disney' and 'Major Labels' fizz with political sentiment without ever sounding overbearing. Albertsson has said that his songs are more about raising questions than preaching answers, and they're even more likeable for it. Because for those who listen carefully, there's an entire personal philosophy mapped out in these 11 warm and wonderful songs. Mount Modern is one of the albums of the year without question - Albertsson's is a unique, gentle and much-needed authorial voice that humanises our often trend-fixated indie turf, and Dad Rocks! is a new band that feels like it should have always been here. This album positively glows with world-wise gentility, and I willingly join the fast-growing legion of Dad Rocks! devotees who can barely contain their excitement for what comes next.