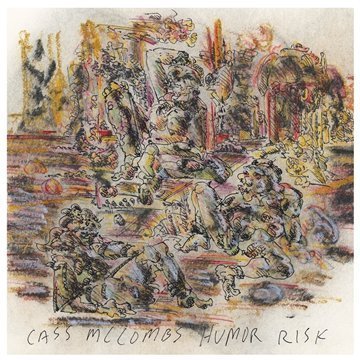 While Humor Risk less instantly memorable than Wit’s End, it’s a lot easier to digest and is probably the record you’ll end up spinning most out of the two. Placed together, the pair stand as a neat assessment of Cass McCombs’ silky talent to combine gloom with old country glamour.»

cass mccombs releases his second album this year, 'humor risk', on domino. 'humor risk' was recorded in various homes and studios in california, new york, new jersey and chicago, and was produced by cass mccombs and ariel rechtshaid, with whom he created 'wit's end', and before that, 'catacombs'. 'humor risk' is an attempt at laughter instead of confusion, chaos instead of morality, or, as fellow northern californian jack london said, "i would rather be ashes than dust!". musically, it is more rhythm-based, tempos swifter to nearly rocking, than the sparse 'wit's end'. infectious melodies are outlined by a wry lyricism that expresses the stories of characters from mccombs' native land. rather than fulfilling the stereotype of the confessional singer-songwriter, he describes the lifestyles and feelings of those that surround him, with more love than judgment: drugs, scientology, western america, and so on, in allegorical form. 'humor risk' portrays yet another face of this versatile and much underrated artist.
description from www.roughtrade.com