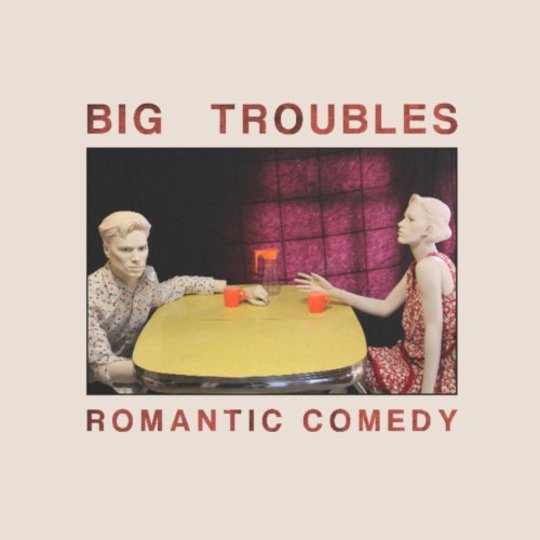 Second albums are, of course, notoriously tricky things. If you’re lucky your debut will have made a splash of a size reasonable enough to train more of the blogosphere’s myriad bodiless eyes towards you, unblinkingly watching and waiting for your next move. At least, that’s what I imagine it feels like. The question is whether to stick or twist – carry on the formula that made you popular in the first place, or sidestep into new territory. This was clearly a dilemma that presented itself to Big Troubles. The east coast four piece, fronted by songwriting duo Alex Craig and Ian Drennan, produced a first record (2010’s Worry), that ranked as one of the year’s best, full of My Bloody Valentine wailing guitars, cheaply programmed drum beats and infectious melodies. With vocals layered in echoic reverb and fuzz, the record had a lazy, dreamlike quality that even endeared it to, amongst others, Lou Reed.

At that point the band had to decide whether to continue with their hazy aesthetic or strip it back to song-writing basics. Sadly, they chose the latter. Calling in Mitch Easter (credits including early R.E.M., Pavement, Wilco), on Romantic Comedy the fuzz has been wiped away, leaving a shiny surface that, whilst impressively gleaming, suffers from a lack of texture. Opening track and first single ‘She Smiles For Pictures’ is indicative of the album as a whole, a song well-crafted enough, yet lacking the passion or drive that could make indie-rock so thrilling in the hands of R.E.M. or Big Troubles’ tour mates The Pains of Being Pure at Heart. The subject matter here reflects the tone of the song, telling us of a girl who “smiles for pictures / even when she’d never do it on her own” – the protagonist and the track itself presenting a kind of disaffected shrug. The band wear their influences on their sleeve, nowhere more so than on the execrable ‘Sad Girls’ which could literally be an Oasis cast-off, replete with a needless key-change that feels like the band are ticking off songwriting staples. It’s the latest exercise in Brit-pop revivalism that reminds you that history repeats itself first as tragedy, then as farce.

That’s not to say that Romantic Comedy is without redeeming features. ‘Misery’ and ‘Time Bomb’ have the punchy bounce and catchy riffs that made parts of Worry so enjoyable. Meanwhile ‘Make It Worse’ has an observational quality lacking in other tracks, and necessary for an album that focuses on vocals at the expense of soundscapes, describing “an east coast kid living the same life that his parents did”. It’s OK for a record to zoom in on suburban boredom, but in turn the music surely has to reflect a sense of teenage urgency and frustration, as Arcade Fire’s last album did so successfully, and, to a much lesser extent, The Pains of Being Pure at Heart’s Belong. Those records, to paraphrase Win Butler, spent their time “staring out the window…longing to be free”; on Romantic Comedy Big Troubles seem resigned, more lounging than longing. It’ll be interesting to see where they go next, but wherever it is I hope they can escape their suburban ennui.