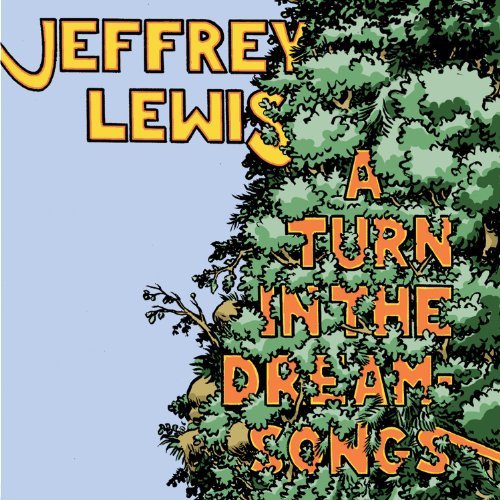 Jeffrey Lewis - A Turn in the Dream-Songs

For all his self-awareness, Jeffrey Lewis is at his best when he is simply writing songs. When he slips into the precocious, self-depreciating, in-joke raconteur, he is doing himself a profound disservice.»

jeffrey lewis returns in 2011 with 'a turn in the dream-songs,' his sixth album for rough trade records. leaving behind most of the garage-rock bursts that peppered previous albums, 'a turn in the dream-songs' is perhaps a sweeter record than any jeffrey has released before, a warmth that is enhanced by the fact that the current songs were recorded (and mixed!) entirely on two-inch analogue tape at england's analogue catalogue all-vintage studio. jeffrey's band on this record is a five-piece, with mandolin by franic (wave pictures) rozycki and drums / bass / cello from johnny flynn's backing band the sussex wit (which includes jeffrey's long-time drummer david beauchamp). most of the songs were recorded live-in-studio at analogue catalogue's cozy hq in the misty hills outside of manchester, uk, often with all five musicians captured on tape performing together in one room, although some wonderful additional assists were also provided by members of dr dog, the vaselines, au revoir simone, misty's big adventure and schwervon!, all of whom have been jeffrey lewis fans / touring partners in the past couple years. this time around jeffrey's inimitably free-roaming lyrics and sounds take us on a trip where we may encounter everything and everyone from cosmic wishes to callow whippersnappers, father yod to sylvia plath, ways to die, ways to live, and the saddest song about green slime you're likely to hear all year. the classy acoustic band, sounding live and loose but sonically dynamite, the vintage analogue recording / mixing process, the relentlessly high quality of the songwriting whether contemplative or freewheeling, and of course another elaborate and unique comic book packaging / artwork design by jeffrey, all combine to make 'a turn in the dream-songs' the most solid and enjoyable album of jeffrey's now decade-long strange career.
description from www.roughtrade.com