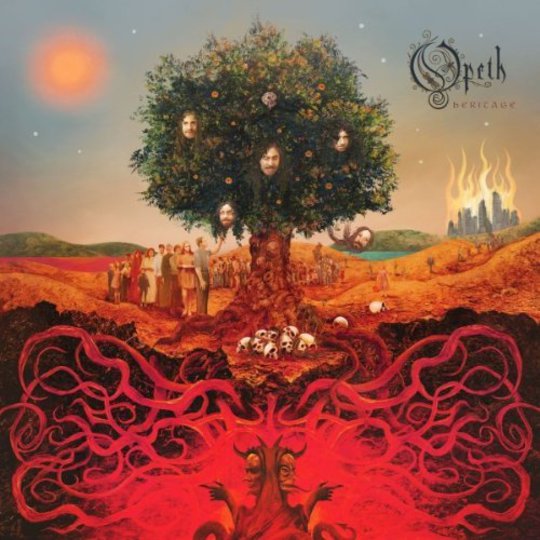 Just as the protagonist in Kafka’s Metamorphosis wakes up to find himself in the wrong body and the wrong species, Swedish death metal pioneers Opeth have realised they’ve been in the wrong genre all these years.

Journalists like to call Opeth’s work 'progressive metal' – a genre invented for them simply because 'metal' doesn’t begin to describe the apocalyptic death metal, mournful acoustic soundscapes and even dark jazz that makes up the band’s eclectic career. (A metal aficionado friend, whose judgement on such matters is beyond reproach, advises me that Opeth's 'first four albums are death metal, the next four progressive death metal, the last two progressive metal'. Just so we're clear on that).

But now Opeth have lost the metal bit entirely: Heritage, the follow-up to 2008’s Watershed, is simply progressive rock, in the vein of Genesis, Floyd and Yes. Quite apart from the guttural roar Opeth fans came to know and love, you could say the Swedes have gone so far down the road of contemplative experimentation so to have left the genre behind entirely.

Frontman Mikael Akerfeldt told Terrorizer magazine this month: 'I feel more inspired than ever, because I’ve allowed myself to be freed from the shackles of heavy metal.'

It tells you much about this record that Akerfeldt was pictured in a Jethro Tull t-shirt. Appropriately Heritage does – in all its moody seriousness – contain a flute solo. Ron Burgundy meets Slayer? Not quite.

In fact Opeth have been doing 'clean' vocals and quiet songs for at least 15 years and Watershed even featured female vocals. The punishing My Arms, Your Hearse album from 1998 contained a credible version of classic Iron Maiden ballad 'Remember Tomorrow'.

Fast forward to 2011 and the journey to classic rock is complete: for Heritage 37-year-old Frontman Mikael Akerfeldt banned screaming. Ground-shaking roars are replaced by a golden-throated tenor – more Dream Theater than Dimmu Borgir. Though an impressive conventional vocalist, given the sometimes embarrassing lyrical content the effect is on occasion mawkish and awkward. Instrumental sections fare better, in particular the spooky and atmospheric album closer 'Marrow of the Earth'.

But crooning aside, as with the best prog acts, the musicianship here is impeccable. From textured, often sparse drumming from Martin Axenrot and Frederik Akesson’s blistering solos (the latter once had a job cleaning away blood and guts from around dead bodies, incidentally), Opeth have lost their bite but not the talent.

Opening track 'Heritage' is two minutes of piano jazz – not dissimilar to fellow Swede Esbjorn Svensson. The dual Spanish guitars that end 'Slither' are gorgeous, recalling James Hetfield’s best melodic moments. It’s not until the halfway point that Opeth flex their metal muscles with a monster riff or two in 'Famine'. It’s riffing in the Deep Purple style, with organs turned up to 11 and angular BC Rich guitars noticeable relegated in the mix. 'Famine' gives Opeth the questionable accolade of being the first Swedish progressive death metal band to open a song with a bongo solo.

But Opeth 3.0 (4.0?) are prog through and through. 'The Devil’s Orchard' may have a metal title, but the challenging, complex riffs, solos, multiple time signatures and moody drama would have been progtastic in 1976. 'Folklore' feels a lot longer than its 8:19 running time. You cannot bang your head to this.

Overall, Heritage lacks the drama and vigour that made Opeth so exciting in the first place. While it is at first shocking to hear a band with such a famously brutal sound performing beard-stroking Pink Floyd/King Crimson homages, the effect soon wears off.

Akerfeldt should be praised for breaking free of an often repetitive genre – there’s nothing wrong with radical reinvention. But this departure didn’t need to be quite so lacklustre.