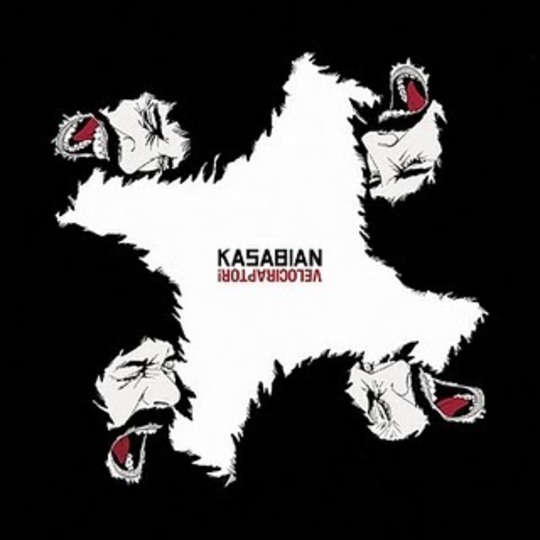 “We're not your average pop band – we're avant garde yet we've sold nearly a million records on each album in England.” Kasabian’s Serge Pizzorno to The Sun

‘like I said before, kasabian reminds me of radiohead, but there's one big difference - this band is NOT depressing.’ nykstukaigeriakava , comment on YouTube video for ‘Cutt Off’

The continued rise of Kasabian has been one of the more baffling episodes of the last few years. Not because of anything to do with the quality of the music – music of all qualities can become popular – more because in an era where you’re more likely to sell peace to the Middle East than an indie record to, y'know, anyone, a band who sound a little like a Big Beat version of The Fall have kind of, sort of become one of the biggest acts in the country.

Three double platinum albums in a row attests to an appeal that has held firm against the ravages of download culture; indeed, unless none of their fans acquired 2009's West Ryder Pauper Lunatic Asylum on the sly, one assumes they have a considerably larger fanbase than a few years back. Though there's an undeniable anthemic bent to their biggest hits - 'Cutt Off', 'Club Foot', 'Empire', 'Shoot the Runner' - it's pretty apparent that the band's slightly stalkery veneration of Oasis and cheery playing up to Northern ladrock stereotypes (despite being neither Northern nor practitioners of ladrock) has probably paid untold dividends in terms of mainstream acceptance. Bearded dandy guitarist Serge Pizzorno, after all, is about as much a 'lad' as Dale Winton, while Tom Meighan is almost certainly one of the most atonal singers to have ever graced the top ten. Are Kasabian a brilliant band? No. Are their fans the nicest people you’ll ever meet? Nope. Will they burn in hell for their cover art? Hopefully. But have they fucked with the mainstream a bit? Sure: they probably account for the weirdest thing in thousands of people’s record collections, they got an album called West Ryder Pauper Lunatic Asylum to number one, and odds are they're about to get one called Velociraptor! there too.

But it’s 2011, and things have changed. Principally, there’s no more Oasis, and whether by design or natural musical development, Velociraptor! sees Kasabian start winding down the beats and entering altogether more Gallagher-esque territory. The stomping electro numbers are still there. But they stomp only infrequently (you have to wait until track eight, ‘Rewired’ to really get any bottom end), and when they do appear it’s usually with the ‘stillgoddit!’ air of a band that can’t especially be arsed with this sort of thing any more, but have a reputation to maintain. The barmy Eastern-tinged fuzzpop of ‘Velociraptor’ is too ridiculous to be anything other than good fun (even if it is a bit of a ringer for Blur’s ‘Bugman’) and the strangulated menace of lead track ‘Switchblade Smiles’ is splendid stuff – mad as a box of frogs and menacing as a posse of wolverines. But elsewhere picking are slim in terms of the heavier stuff: ‘Days Are Forgotten’ sounds alarmingly like Shed Seven’s ‘She Left Me On Friday’.

Elsewhere, the band have made the unfortunate decision to write a set of reasonably tuneful, conventional songs that would ideally require a singer with a nice voice. ‘Goodbye Kiss’ and ‘La Fee Verte’ are competent psychedelic-era Beatles homages that’d be pleasant enough (er, well, accepting the latter opens with the line “I see Lucy in the Sky, telling me I’m high”) if it weren’t so excruciating to hear Meighan trying his best at proper singing. The vocals are flat and horrible and totally play against the singer's proven strengths ie, slurring aggressively. ‘Acid Turkish Bath (Shelter from the Storm)’ sounds a little like something epic by Neil Young, only impaled on those doltish vocals, while on ‘Man of Simple Pleasure’ Kasabian finally surrender to the inevitable and try and sound like late period Oasis, sans the saving grace of Liam's voice.

There are some bright patches: ‘Switchblade Smiles’ and the foggy, textured electronic melancholy of ‘Neon Neon’ make for a tremendous closing one two. ‘I Hear Voices’ is poised, effective electropop. And if it outstays its welcome, the skiffled up Bond theme of opener ‘Let’s Roll Just Like We Used To’ hypnotises you with sheer crass strangeness, at least for a while. But for the most part, it feels like either overweening confidence or desire to snare rudderless Oasis fans has led to Kasabian attempting the sort of conventional guitar pop record that they’ve always so successfully avoided making.