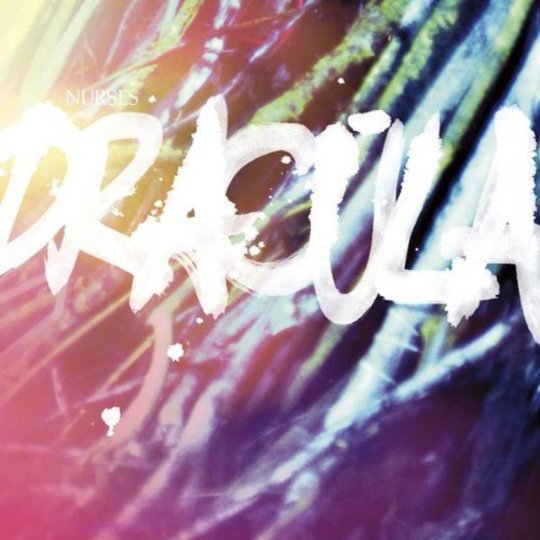 There’s been something of a psychedelic-pop renaissance, recently. You might have noticed it seep through the cracks of mainstream music, the shimmering daze of Animal Collective’s warped sun-kissed sound echoing in the washy chimes of chart-botherers like MGMT and more recently, Foster The People. Portland trio Nurses’ new album, Dracula, arrives on a tide of appreciation for ethereal spins on melodious pop, then – a wave of hunger for music that sounds like old Beach Boys cassettes left to warp on a car dashboard in the Californian sun.

Recorded in a cabin on the coast of Oregon last winter, with Prince the only musical touchstone the band members would allow themselves, Dracula is a compelling listen. It’s at once more visceral than their antecedent effort, 2009’s Apple’s Acre – more rhythmic, pulsating with dub bass lines and apoplectic grooves – and more delicate, like a freak-folk glass menagerie, colours refracting around vocalist Aaron Chapman’s sung pop hooks. Despite its title, Dracula doesn’t have much bite, but rather soothes you into hazy submission. In fact, it’s such a sonic patchwork quilt of different ideas – lo-fi production, R&B timbres, sparse avant-garde leanings and Sixties good-times pop – that it resembles Frankenstein’s monster more than the Transylvanian count.

Sharing more common ground with leftfielders Grizzly Bear and Ganglians than their poppy Portland peers Portugal The Man, Nurses have fashioned an impressive album out of swirling guitar lines, often-wailing vocals and whispery hard-to-pin-down textures. What are, at heart, simple pop songs occur over a tapestry of weird, marauding sounds: ‘Dancing Grass’ sprawls out over reverberating gun shots, door creaks and shop bells, while Chapman spins a falsetto vocal over a backdrop of Stars Of The Lid-style drones on ‘Through The Window’. It could have easily ended up sounding convoluted – instead it’s richly nuanced, fiercely evocative even.

From the primal drum machine surges of ‘Extra Fast’ to the creeping slow-dance mechanics of ‘You Lookin’ Twice’ – a sort of slow-motion psych-spin on Jermaine Stewart’s Eighties pop thumper ‘We Don’t Have To Take Our Clothes Off’ – it’s an album of subtle surprises. Most surprising of all, perhaps, is its strange poignancy. On paper, the repeated refrain of ‘Eternal Thrills’ shouldn’t tug so keenly at heartstrings: “take the sun / cos’ we’re always having fun”. However, adrift in a sea of rushing sounds and delivered with a willful resilience to the song’s minor key chords and melancholy tone, it arrives as a thuddering punch to the gut.

The album was, according to press release blurb, approached without specific roles for the band members: no sole guitarist, keyboardist or drummer, but rather three multi-instrumentalist producers layering as they see fit as they went along. It’s a decision that has paid dividends – though Dracula's meandering structures will frustrate some, few could deny how organic and free it all feels, swimming from idea to idea like a stream of consciousness musical prose, the musical equivalent to a Thomas Pynchon novel in its luscious, languid looseness. Mesmerising throughout, it’s a beguiling and brilliant listen.