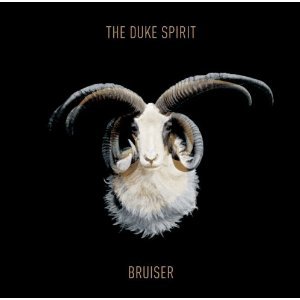 Bruiser has managed to take what The Duke Spirit are great at and expand it to create something greater.»

the duke spirit release their highly anticipated new album 'bruiser' on fiction records. the five piece from london; liela moss, toby butler, luke ford, olly betts and marc sallis; have spent the past eight months whipping their new tunes into fighting shape. returning from two years of touring behind their acclaimed album 'neptune', the band hunkered down in their new london studio space for the first time ever to sketch out tracks on their own turf. recording sessions were fuelled by the band's rekindled appreciation for an eclectic mix of music; from robert fripp and david bowie to roxy music to depeche mode. after a few months of work in london, the band grabbed their tapes and files for a pilgrimage back to los angeles to finish the record with andrew scheps (johnny cash, chilli peppers, metallica). scheps (who has a rep for being rick rubin's favourite pair of ears, as well as a production wizard) helped them slim down their instrumentation so it would ultimately thump on the stereo. 'bruiser' is a fitting album title, as musically it's a collection of squealing guitars, churning riffs, and powerful drumming.
description from www.roughtrade.com