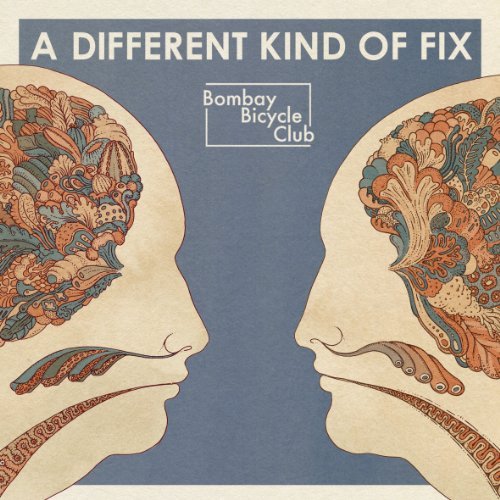 A Different Kind Of Fix is an evolution of baby steps for Bombay Bicycle Club and one which will leave you wondering if Jack Steadman and co are ever going to burst into full bloom.»

Bombay bicycle club release their third album, 'a different kind of fix' through island records. in a little over three years, the band will have released three lps - an extraordinary and increasingly rare feat in the 21st century music industry. from the teenage indie kicks of their debut; to the sparse, timeless folk of last summer's top ten album, 'flaws' (nominated for an ivor novello award); the quartet open a new and beguiling chapter with, 'a different kind of fix', one that cements their place at the very forefront of british bands in 2011.
recorded in hamburg, london and atlanta, 'a different kind of fix' captures the sound of a band effortlessly progressing and innovating at a startling rate. guitars are firmly plugged back in for album number three, but added to the mix with potent results are synths, sampled loops, layered vocals from all four band members and washes of reverb throughout. production-wise, the album reunites bombay bicycle club with jim abbiss - who produced their debut - and also introduces them to ben allen - noted for his work with animal collective - whilst lead singer, jack steadman co-produces throughout. indeed, jack has been quietly making electronic music as a bedroom side-project for the past few years, and these sounds gently permeate throughout the rich and textured production on 'a different kind of fix'. an electric guitar album with a human heart for sure, but one with a bionic pulse. the sheer breadth of styles and range of influences on display across the record is startling. first single, 'shuffle', emerges from a looped piano sample to burst forth into one the band's biggest songs to date, as the piano loop recruits gargantuan drums and bass that march to an epic chorus on their way to a house break of balearic proportions. album opener, 'how can you swallow so much sleep' is all marble steeped vocal loops and breathy samples, which are also used to devastating effect on 'lights out, words gone': a song of such rarefied beauty and rhythmic hooks, one imagines a lost, codeine-fuelled talking heads album. 'take the right one' is the kind of timeless, life-affirming melodic fuzz rock that alex chilton and teenage fanclub have set (broken) hearts on fire with; 'beggars' follows the same deft, folk path laid by 'flaws' and with the low-esque hymn, 'fracture' and gorgeous album closer, 'still' - just jack, piano and an ocean of reverb - provide inlets of beatific calm amongst the album's more widescreen rock moments, 'bad timing', 'leave it' and 'what you want'.
description from www.roughtrade.com