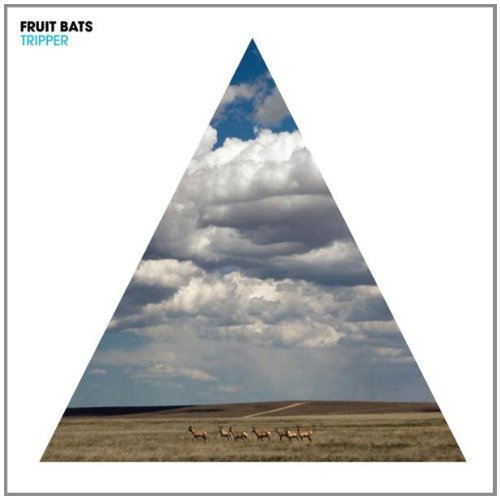 The kind of enchanting, quietly literate indie rock record you could build an intricately compelling life story from.»

cd housed in a gorgeous foldout die-cut sleeve, and inserted poster. with the 2001 release of the fruit bats' debut album, 'echolocation', eric d. johnson embarked on a career in music that has, to date, included ten years with the fruit bats, sideman duties for bands including califone, vetiver and the shins, and more recently, soundtrack work for films like ceremony and the soon-to-be-released paul rudd comedy our idiot brother. 'tripper', the new and fifth fruit bats full-length, was recorded at wacs studio in los angeles with thom monahan, best known as producer for the last four vetiver albums, devendra banhart's 'cripple crow', and the pernice brothers. for the first week of recording, johnson brought in a full band - sam wagster, ron lewis and graeme gibson - to capture some of the live excitement of the previous fruit bats album, 2009's the ruminant band. however, having recently worked alone on soundtracks for an extended period, johnson knew that he wanted tripper to be more of a solitary pursuit than his previous album. for the remaining four weeks, he worked with monahan to deepen and refine the sound. though, perhaps the most radical thing about the album is not its haunting production, but the way it allows narratives to shape its songs. johnson says that, though he began experimenting with story songs on the ruminant band, he has only recently made them his focus. as johnson approached recording for this latest fruit bats album, he began to think, more and more, about the appeal of changing scenery. his own process shifted slightly to focus more on story-based songs, and following his collaborations with film-makers, he began experimenting with more abstract, less folk-based sounds. the resulting album, a bittersweet meditation on hitting the road, leaving the familiar behind and reinventing yourself, is a reinvention itself.
description from www.roughtrade.com