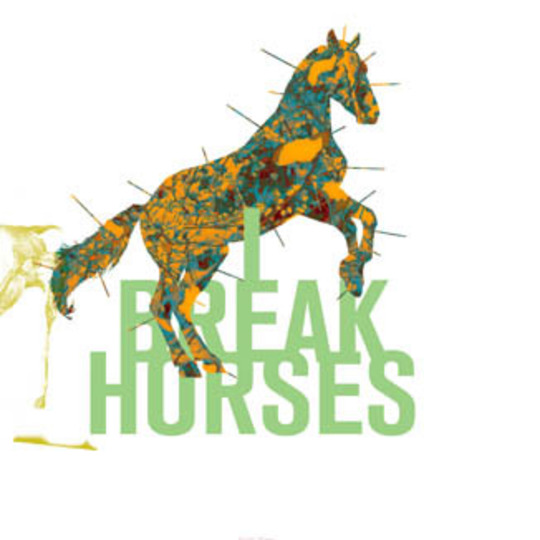 For a pair of self-confessed hypochondriacs, Maria Lindén and Fredrik Balck make music of such courage and hopefulness you'd think the condition was, y'know, all in their heads. Perhaps the finest album to emerge from the nu-gazer scene in several years, lyrically I Break Horses' Hearts might be all terminal sniffles and suspect lumps but sonically the Swedes operate boldly and dramatically, meeting head-on with the great wilderness, otherwise known as your Twenties. It's as if their music is where they take flight, transforming into the fearless super-versions of their meek selves, Handi Andies be damned.

Granted the same quibbles hampering most nu-gaze albums are apparent here too. There's the mechanical, linear songwriting, the simplistic compositions and the severe lack of variety, all present and correct. Rather than the Thames Valley progenitors instead the duo-come-couple come off a bit like Fuck Buttons without the fuck, via Maps' touching but clunky debut. And with Lykke Li, Zola Jesus, Nicki & The Dove, EMA and many others trading caterwauls over slow-building reverbatronica, the sound of an ethereal nymph competing with big, driving beats is getting tired of late. Really tired.

All of which can be forgiven when, in a sub-genre hardly renowned for its steely valour, in stark contrast to their deodorised peers I Break Horses are a forthright, dogged and defiantly heated prospect. Something like nu-gaze's answer to The Waterboys, their debut is, first and foremost, resounding proof that subtle beauty doesn’t have to be self-defeating, drippy or retiring. Inevitably there is a little bit of tweeness in there, and because those sensitive types can't get enough of that sweet, sweet sorrow - a little melancholy too. But it's the kind of glumness that befalls the kid who's leaving home, signalling both the end of childhood and absolutely the beginning of it all. Consistently melodious, the Swedes' dreamy but robust music captures just how that exact juncture of life felt - over-romanticised and headstrong from the illusion of invincibility.

Majestic and opulent, 'Winter Beats' and 'Hearts' recall Vangelis' 'Chariots Of Fire', and establish the sky-scraping, tempestuous pitch the Swedes maintain for, by and large, the entire rest of the album. 'Pulse' plies MBV's guitar swoon over a rash of frantic drumming; while from a sombre synthline 'I Kill Your Love, Baby!' blossoms patiently into a hymnal voyage of discovery. As is the case throughout, the genre's stereotypical listlessness is substituted for a bit of guts'and'glory substance, while somehow retaining that wispy, quality. Their chutzpah also enables I Break Horses to sidestep the genre's tendency for eyelash-batting narcissism, replacing it with an unpretentious desire to wow.

Largely written by Maria Lindén, in the grand tradition of Cocteau Twins and Talk Talk it's a distinctly feminine sound – grand and powerful, yes, but never pushy or overbearing. The synths are neat, sweet and treble-y and the guitars clean and sharp, while the pillowy low-end billows like lipsticked bedsheets in the breeze. A misty vision of honeyed, furtive teendom, 'Pulse' approximates the M83 sound, which, almost deliberately bland, mirrored the mundane waiting-around you do as a teenager, while simultaneously your imagination powers with constant stimulation, represented in the music by those lushly buzzing, sensuous synths. The tender but stoic 'Cancer' also feels adolescent, even fragrantly pheromonal. Made from the stuff of private longing and plastic-gold vanity mirrors, pinkish blushes and soft light encircles muffled beats and chiming organs. Followed closely by 'Load You Eyes', a stately bouquet of a song, trapped in a kind of snow globe memory.

The rest of the album is made up of a series of special moments, like the gong-like cymbals which shoot 'Empty Bottles' into a twilit delirium, or the bass note stuck midway through 'No Way Outro', which, stoked by martial drums, makes a fist from Lindén's cherubic whispers. High-reaching and ever surging, any number of these tracks could serve as life-affirming fodder for that matinee epic's climactic final scene.

However, exquisitely melodramatic though it may be - inflated to silly dimensions of passion - even Hearts' most fanciful moments are grounded in a level-headed sincerity, as if the Swedes take very seriously the idea that nothing is quite as powerful in this world as a girl's breaking heart. You can bet Sophia Coppola will be head-over-heals. As wonder struck as it is canny, Hearts is a spangled, strident and exhilarating vision of adventure and womanly strength. What this duo have is exactly that – heart. They also have balls to spare, but don't tell them that – those little fellas get into all kinds of trouble. Wouldn’t want to worry them.